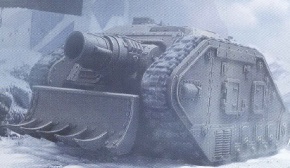 The Thunderer Siege Tank is a conversion of the Destroyer Tank Hunter chassis, replacing the Laser Destroyer with a Demolisher Cannon.[1a]

In addition to the Astra Militarum, some Skitarii divisions are known to make use of the Thunderer.[1d]

When the advanced technology of the Destroyer Tank Hunter's main weapon malfunctions, or is damaged in battle, the Adeptus Mechanicus often re-gun the the chassis with a different weapon. A common conversion is to replace the damaged Laser Destroyer with a Demolisher cannon, to fill the role of a Leman Russ Demolisher.[3] It was such a successful conversion that some Adeptus Mechanicus even claiming to have evidence for its inclusion in the canon of STC design.[4a]

Originally created to reuse a spare Destroyer chassis, the Thunderer soon came to be used as a close range infantry support vehicle. They can help infantry advance by destroying intervening terrain features while also giving them rapid support if they come across something they can't handle.[3]

In the 41st Millennium

Once the Laser Destroyer has been stripped out, as well as its capacitors and batteries, there is just about enough space for a Demolisher Cannon and ammunition to be installed, although only around eighteen Demolisher Shells can be carried at once, a pitiful amount in a battlefield situation. Often, commanders will still chose a Leman Russ Demolisher over the Thunderer, but the main role of the Thunderer is to engage enemy held buildings or bunkers which are directly in front of it. Having no turret reduces the chances of taking a fatal hit which could disable the weapon and it reduces the overall profile of the vehicle. While the vehicle could potentially destroy tanks, the short range and small traverse distance of the gun makes it less useful for this.[1b]

The Thunderer is not a vehicle produced specifically for deployment as it is more likely that the regiment will have Demolishers. Any Thunderers will likely be there to fill any gaps in the Demolisher line. It is possible however that a few Thunderers have been produced as newly built vehicles.[1b] It is known that patterns of the Thunderers beginning to appear on various Forge Worlds, although whether this has been sanctioned by Mars is unconfirmed.[4b]

Often extra armour plates and bracing is installed in the roof of the vehicle to protect from overhead attacks in tight city fights.[1b]

The Thunderer is armed with a Demolisher Cannon. It may also be upgraded with Camo Netting, Extra Armour, a Hunter-killer Missile, Improved Comms, a Mine Sweeper, a pintle-mounted Heavy Stubber or Storm Bolter, a Rough Terrain Modification, a Searchlight, Track Guards and Smoke Launchers.[1e] 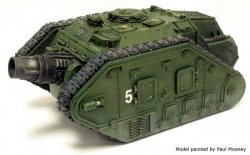