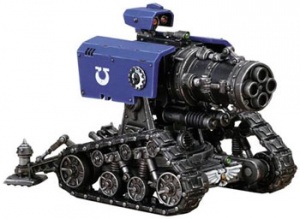 An exception to the general rule regarding Space Marine weaponry being highly portable, the Thunderfire Cannon is most commonly used in terrain where mobile artillery platforms (i.e. Whirlwind) cannot operate, or when a defensive emplacement must be maintained. These colossal weapons are mounted on rugged tracks which provides a level of mobility, although they are most often deployed Thunderhawk Gunships or other transports.[1]

Their quad-barrel nature allows for a punishing rate of fire, and each Cannon is capable of firing three different varieties of shot. The first type of shell detonates on surface contact, commonly used against infantry in the open, while the airburst shell is employed against infantry taking cover. The most devastating, however, are the subterranean shells, programmed to burrow into the ground before exploding. The resulting explosion causes seismic disruptions which can knock the enemy off-balance, making them easier targets for follow-up fire. This affects even grav-vehicles, whose anti-gravity generators are negatively impacted by the sub-surface shockwaves caused by the shells.[1]

A Land Raider variant, the Land Raider Achilles, uses the Thunderfire cannon as its main weapon.[2]