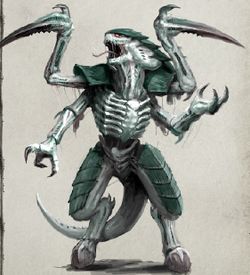 A warrior of Tiamet

Hive Fleet Tiamet is a Tyranid Hive Fleet signs of which were encountered in M35 and is theorized to be a Tyranid implant-probe sent into the Galaxy ahead of the larger Hive Fleets[1]. It is also unique, in that it has claimed the worlds of the Tiamet System without entirely stripping them of biomass and continues to guard its conquered territory with single-minded ferocity.[3a]

The carapace of every single organism spawned by Hive Fleet Tiamet is made of a unique chitin composite that provides excellent protection against extreme bursts of energy and kinetic force. The Hive Fleet's organisms and Bio-ships may great use of this and when in combat they fight in dense clutches, grinding their way forward through hails of enemy fire, as their diamond-hard exoskeletons form a formidable living shield.[3a]

It is believed that the Genestealer was introduced to the moons of Ymgarl from Tiamet, carried inside the vessels that had been sent to destroy the system.[1]

So costly have assaults against Tiamet proven that - in a galaxy replete with more active invading threats - they have been infrequent and hard to justify. Only now as the hive fleet's tendrils multiply and push aggressively outward, does the folly of such inactivity become clear. Tales abound of a Genestealer Cult calling itself the Choir of the Void, whose members have arisen on many worlds only to take to ship once their uprisings have succeeded. The Choir leave abandoned worlds in their wake, sailing unmolested into the heart of Tiamet territory and bringing great feasts of biomass to their deities. Meanwhile on the world of Ziaphoria in the Tiamet System, more and more psykers complain of a building psychic scream emanating from that world, those in power began to ask what purpose the Tyranids' biostructures are serving.[4]

It is speculated that cosmic debris or solar winds may have introduced molecular-coded Tyranid DNA into the large double binary system on the Eastern Fringe known as the Tiamet System. The system contained seven life-sustaining worlds and a host of lesser planetoids, and was discovered by an Explorator fleet in M35. They surprisingly noted that every biosphere was infact a Death World swarming with dangerous life forms which managed to flourish despite whether the prevailing conditions were jungle, ice, desert or even airless rock. Xenologists determined that all the life forms shared a common ancestry and had somehow developed various ways to travel from world to world.[1]

The Explorator fleet was soon attacked by the deadly creatures and their crafts were contaminated. Rather than risk spreading the new lifeforms further into the Galaxy, they quarantined themselves in the system and continued to transmit reports for one hundred and sixty two hours before the creatures overwhelmed them.[1]

The Tiamet system was since fusion bombed on several occasions, but life was never fully extinguished. It now lies within the area of space swept over by Hive Fleet Kraken and the system's fate is unknown.[1]

Sometime after this, a group of Eldar Rangers entered the Tiamet System and traveled to the Jungle World Ziaphoria. What they find there astounds them, as they discover a continent-spanning organic conical structure, formed of chitin and soft encephalic flesh, that thrummed with immense psychic energy. The Shadow in the Warp was horrifically strong here and several of the Rangers convulsions upon nearing the super-structure, their minds sent into shock by the sheer force of Hive Fleet Tiamet's nullifying aura. The Rangers then escape the System with news of their discovery[3a]. A Deathwatch Kill-Team would later arrive on Ziaphoria, while doing a survey of the System, and also encounter the giant structure. However when they neared it, the structure pulsed and sent out a tsunami of psychic energy that rolled across the world. This caused the death of the Kill-Team's Librarian, which alerted the Hive Fleet to their presence. As the Tyranids close in on them, Watch Sergeant Gjunheim manages to send one final vox transmission to the Kill-Team's orbiting Corvus Blackstar, warning of the nightmare they have uncovered, before the Space Marines are killed by the Xenos. The Corvus is able to reach their ship, which then escapes from the Tiamet System and returns to Watch Fortress Haltmoat with Gjunheim's message.[3b]

It soon reached the Ordo Xenos and has caused much speculation amgonst the Ordo's Inquisitors; with some having theorized that the Xenos structure may be a powerful beacon, guiding yet more Tyranid Hive Fleets into the galaxy[3a]. Gjunheim's report also reached the excommunicated Inquisitor Kryptman, who then met with Haltmoat's Watch Commander, Vilnus, in order to formulate a plan that will see Hive Fleet Tiamet's structure obliterated[3b]. What ever the massive structure may be, it is not yet completed and sightings of Tiamet's Bio-ships have now become worryingly common, as the Hive fleet seeks fresh yields of biomass in order to finish its creation[3a]. The Hive Fleet has also begun capturing ships that near the Tiamet System and have also created Genestealer Cults that leave their worlds to travel to the System.[3b]