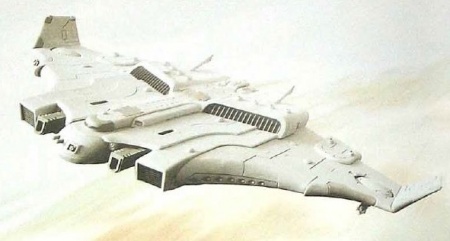 The Tiger Shark is a flyer used by the Tau Empire. It is the Barracuda's larger cousin, often deployed in the fighter-bomber role.[1c] It is also a Drone carrying aircraft that is often used to deploy gun drones from its internal racks at high altitude.[4]

The Tiger Shark is usually encountered flying in support of Tau Hunter Cadres during major operations, it is faster and more manoeuvrable than the Imperium's direct equivalent - the Marauder Bomber - but lacks the large bomb payload.[1c]

Tiger Sharks are never as numerous as the Barracuda, but have many features and systems in common with it. All crew come from the Air Caste, giving them the natural advantage of superior three-dimensional awareness and tolerance for higher acceleration speeds, and more Gs in the turn, than a human pilot. Like the Barracuda, different Air Caste Septs operate slightly different versions. Other Tiger Shark variants have been identified armed with multiple burst cannons and Seeker missiles.[1c]

The Tiger Shark's main role seems to be the deployment of drones. Its drone racks can deploy a shower of remote weapons platforms anywhere over the battlefield, as well as strafing with its ion cannons and wing-mounted missile pods. It is armed with ion cannons and Missile Pods for ground attacks, and drone-controlled Burst Cannons for defense against enemy fighters, although a flight of Tiger Sharks will usually also be accompanied by Barracudas as fighter cover.[1c]

The aircraft has two crew members, a pilot and a navigator/weapons operator. Their cockpit is also an escape pod, which can detach from the aircraft's fuselage and has limited gravitic mobility to bring the crew safely back to the ground.[1c]

During the Taros Campaign, Tigers Sharks supported Tau operations as a rapid response force. They were often the first to respond to the Imperial Guard's advances, quickly deploying their Drone squadrons in the area, while Tau ground forces moved into place.[1c] 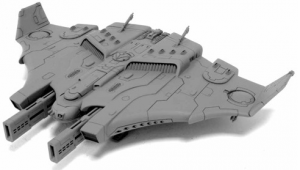 First seen during the Taros Campaign, the AX-1-0 variant is a Tiger Shark that's been refitted for Titan-killing duty by replacing its Ion Cannons and Drone Racks with a pair of Railguns [1a].

The AX-1-0 provided a nasty shock when a strafing run from one destroyed the Warhound Titan Advensis Primaris. The three other Warhounds in the battle then withdrew rather than face such firepower.[1b] 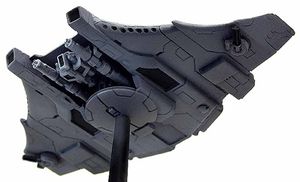 The AX-2-2 varient is a Tiger Shark that has been modified to carry and deploy two Remora Drone Stealth Fighters. In addition to this the AX-2-2 compliments the fighters by sending them additional data. If the AX-2-2 is destroyed or disengages the fighters will slow down due to their limited artificial intelligence.[2] 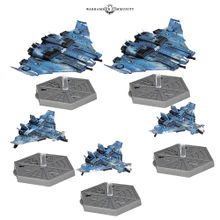