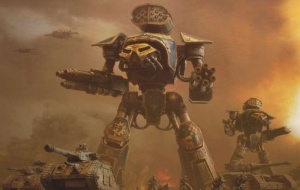 A Reaver Battle Titan in action

Titans are immense war machines built in humanoid form. Most of the major races and forces of the galaxy utilize their own forms of Titans.

Imperial Titans are known as God-Engines and are controlled by the Collegia Titanica, a powerful military arm of the Adeptus Mechanicus. The Collegia oversees the various Titan Legion's, each of which are based on a Forge World. Titans originally began as Human technology to allow settlers on new worlds to function in hostile environments, but today the god-engines are the most powerful fighting machines of the forces of the Emperor. The construction of Imperial Titans takes many years, and many of the more complex designs are considered lost technology.[5a]

The forces of Chaos utilize Titans largely drived from those of the Imperium. These are operated by the Traitor Titan Legion's and maintained by the Dark Mechanicus. Many of these Titan engines have become corrupted over the years by the powers of the Warp and are now furious engines of hate possessed by Daemons, their pilot little more than a slave to the machine. Chaos Titans are heavily mutated, often sprouting tails or techno-organic appendages.[5d][6]

Craftworld Eldar Titans are very different from those of the Imperium. They are tall, slender, and graceful and built around the psycho-plastic known as Wraithbone. They benefit not only from the experiences of their crews (who are brought up with Titans from birth) but the collective conciousness of the large Spirit Stone at its core. This gives Eldar Titan's a consciousness of their own.[5c]

Ork Titans are normally given the classification of Gargant. These are ramshackle warmachines that begin to appear in particularly successful Waaagh!'s and are religious totems to honor Gork and Mork. Gargants are miracles of Ork ingenuity, built by prodigious Mekboyz and crewed by a combination of Orks, Gretchins, and Snotlings. Though crudely built, they carry awesome firepower and bizarre technologies.[5b]

The Tyranids have created a number of species that are Titan in size. These are wholly organic beings often resemble giant spiders and scorpions and are deployed against the most stubborn foes of the Hive Mind. As with all Tyranid organisms, rapid mutation and adaptability is common to Bio-Titans. They appear to be a composite of several creatures so closely meshed together that they have since become indistinguishable. Bio-Titans are notoriously difficult to kill. Equipped with the thickest of chitin armor, the creature can still often function even if badly damages.[7]

The Necrons do not utilize standard Titan war engines, though they do have several titan-scale war engines such as the Megalith[8], Æonic Orb[9], and Abattoir[9].