Symbol of the Collegia Titanica 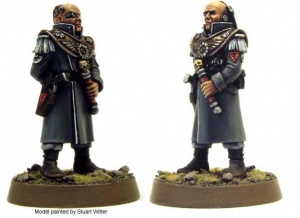 The Collegia Titanica was formed before the Age of the Imperium during the Age of Strife. It is thought that the first Titans were created during a terrible war on Mars against a debased caste of cabalistic heretics dubbed the Cy-Carnivora. Vast swathes of the Red Planet had fallen to the Cy-Carnivora Mekwrights, and it took the creation of Three Titan Orders to annihilate them. After defeating the Cy-Carnivora and other horrors of Old Night from the Red Planet, the Titan Legions became guardians of various Forges. It was during this time that they grew and took on their own unique characteristics and traits.[9]

After the Treaty of Olympus, the mighty war machines of the Collegia Titanica joined the Legio Astartes and Imperial Army in the Great Crusade to conquer much of the Galaxy. As this new Imperium expanded, the Adeptus Mechanicus took many worlds for themselves. These planets were settled and converted into Forge Worlds, and became the bases of new Titan Legions.[2]

During the Horus Heresy, part of the Collegia turned against the Imperium along with almost half of the Adeptus Mechanicus. The Traitor Titan Legions even took part in the Siege of the Imperial Palace. At the defeat of the rebellion, the rebel Titans were driven into the Eye of Terror, along with the rest of those who had sided with Horus.[3c] 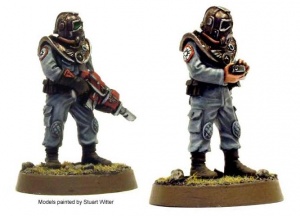 The Collegia has four divisions: Divisio Mandati, Divisio Telepathica, Divisio Investigatus, and most importantly, the Divisio Militaris which actually includes the Battle Titans. The Divisios are further divided into a number of "Legions" or "Orders": groupings of Titans such as the Fire Wasps Legion or War Griffons Legion.[3a] Each Legion is a self-contained unit headed by a high-ranking Princeps.[6] Each Titan Legion has its own unit of Magos Autokratoris Tech-Priests who are charged with maintaining the Engines.[7]

The Orders or Legions of the Divisio Militaris (or more simply the Military Orders) are the main military forces of the Collegia, and each, as self-sufficient units, includes its own Princeps and Moderati, ground combat troops and support staff in addition to its Titans.[3b] Each Legion is based on its own Forge World[3b] — most Forge Worlds having one (or in some cases several) Titan Legions.[4] Legion detachments are stationed throughout the galaxy, guarding vulnerable locations across the Imperium. Many Legions are stationed near the Eye of Terror, ready to combat their Chaotic counterparts.[3b]

Legion strength is typically around 50 operational engines.[1] Battle losses can take centuries to replace, as the construction of a new Titan is a long and laborious process. The Warlord is the most commonly found class while the Imperator is by far the most formidable but an increasingly rare sight on battlefields. Though there have been rumours of a stronger class that existed during the Great Crusade (possibly the Apocalypse class). Titan Legions are deployed only in the most vital campaigns and on battlefields that will allow them the room to manoeuvre and unleash the full power of their colossal weaponry.[Needs Citation]

Every Titan Legion is divided into a number of Maniples, each of which is commanded by a Princeps Senioris and consists of around five Titans. There are countless Maniple variations, but the most common is known as the Axiom which consists of a Warlord Titan leader, a pair of Reavers for support, and a pack of two Warhounds for scouting. Other known Maniple configurations are the hard-hitting Myrmidon (3 Warlords and 2 Reavers) and light Venator (1 Reaver and 4 Warhounds). Each Maniple is further broken down into a number of Sub-Maniples.[8]

The Titan Orders of the Mandati are known as "Executive Orders". They travel in vast temple-spacecraft, responsible for bringing the Pax Imperia to independent human worlds. Each temple ship carries a small but potent number of the immense Emperor Titans, plus priests, regular troops, maintenance adepts and support personnel.[3b]

Each Emperor Titan is its own self-contained unit, carrying members of the Adeptus Arbites, the Inquisition and the Adeptus Terra. It is through this combination of persuasion and vast firepower that many worlds are brought into the fold of the Imperium.[3b]

The elite of the Mandati's orders are known as "Missionary Orders" - they travel beyond the known areas of space, often accompanying Rogue Trader missions.[3b]

As a highly specialised Divisio, the Telepathica is somewhat smaller than the Mandati and Militaris Divisios. The Telepathica is responsible for the dreaded Psi-Titans. Its orders are the Telepath Orders such as the Ordo Sinister, each said to operate from a secret forge world near the heart of the Imperium.[3b]

The Investigatus is the research division; its role is to construct the Titans of all the orders, and to engineer and test improvements in technology. All of the Investigatus orders are based on Mars, the capital Forge World. At times a research order takes part in battles in order to field test new designs.[3b]

The Secutarii, also known as the Titan Guard, are an infantry force of the Collegia Titanica that accompanies its Titans into battle. These Skitarii warriors are meant to mop up survivors left in the Titans wake.[5]