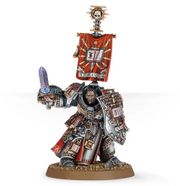 The Titansword is a relic Nemesis Force Sword wielded by the Supreme Grand Master of the Grey Knights since their Founding, currently Lord Kaldor Draigo. Perhaps the mightiest blade ever carried by a Grey Knight, the sword is anathema to daemonkind and must be psychically attuned to the mind of each new wielder. It is also known by the names Mind's Edge, Foebane, and Lifedrinker.[1]

The Titansword is said to have been forged by the Emperor for one of His generals during the Unification Wars whom He taught to use his mind to unlock its power. It passed into the hands of the general's champions and saw service throughout the Great Crusade. At the end of the Horus Heresy, it was among the relics Malcador the Sigillite bequeathed to the Grey Knights, given the name Titansword by the first Supreme Grand Master, Janus. Ever since it has been wielded by the Supreme Grand Master of the Grey Knights,[1] who swears an oath on the blade after being elected to the position.[3]

The blade was nearly lost in the Battle of Kornovin in 901.M41 when Lord Geronitan fell in combat with the Daemon Primarch Mortarion. Elected to succeed him in a psychic communion, Kaldor Draigo retrieved the sword, swearing his oath on it before defeating Mortarion with his True Name and carving Geronitan's name into his heart.[3]

The Titansword was broken by the Daemonblade of M'kar the Reborn in his second duel with Kaldor Draigo on Acralem in 999.M41, but the shattered stump of the blade was still sufficient to banish the Daemon Prince. Cast into the warp along with M'kar, Draigo was able to reforge the Titansword from the remains of the axe of Kar'voth, using sanctified flames to melt the weapon and drive out its daemonic taint.[2]