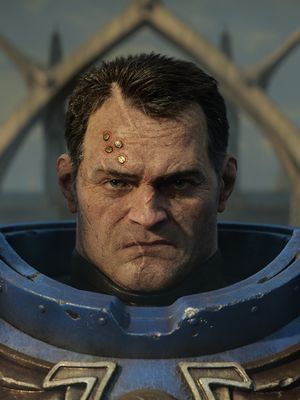 Titus was a Captain of the 2nd Company, who took part in the defense of the Forge World Graia following the Graia Invasion.[1] He has since crossed the Rubicon Primaris to become a Primaris Space Marine[4] and has been demoted to the rank of Lieutenant.[5]

Titus had served for over 150 years by the time of the Graia campaign. In his youth he struggled with his own temper. During one campaign against the forces of Chaos he was badly injured slaying a Chaos Sorcerer who wiped out the rest of his squad. The aftermath of that action led some to question how Titus survived where the rest of his battle brothers had fallen.

Titus became Commander of the Second Company when his predecessor died in battle, and continues to feel the weight of taking over his mantle.[1]

When Orks led by Warboss Grimskull invaded the Forge World of Graia, local planetary defences were unable to repel the invaders. The 203rd Cadian Regiment, as well as Titus and his Ultramarines were dispatched to defend the Forge World. Titus personally led two members of his command squad, Sergeant Leandros and Brother Sidonus, on a mission to secure one of the planet's Titan manufactorums, as well as assisting the 203rd's last surviving officer, 2nd Lt. Mira.[3]

Titus and his squad were diverted to assist Inquisitor Drogan in retrieving the power source of an experimental Warp-powered weapon, the Psychic Scourge. Titus survived direct exposure to the power source, raising suspicions in Drogan and Leandros. Upon travelling to Drogan's laboratory to use the Scourge, the Ultramarines were betrayed: "Drogan", possessed by a Daemon, opened a Warp rift to allow a Chaos invasion of Graia, led by the Chaos Lord Nemeroth.[3]

The Ultramarines fought their way to a nearby Titan hangar, slaying Warboss Grimskull en route. Titus commandeered the Warlord Titan Invictus, using Drogan's power source to fuel the Titan's Volcano Cannon and fire on Nemeroth's rift. The rift was contained, but not yet closed.[3]

Titus entrusted the power source to Sidonus while he hunted Nemeroth personally - however the Sergeant was ambushed and killed by Nemeroth, who then took the power source, intending to use it to ascend to Daemonhood. Titus interrupted Nemeroth's ascension at the top of Graia's orbital spire, tackling him off the spire mid-transformation. During the fall, Titus continued to fight Nemeroth, eventually killing him, before shattering the power source and closing Nemeroth's rift with the resulting explosion of Warp energy.[3]

Titus' survival and resistance to the Warp energies of the power source and rift raised suspicion. Brother Leandros reported Titus to the Inquisition for potential heresy, and he was arrested by Inquisitor Thrax.[3]

The details of Titus' time with the Inquisition are unknown. He was succeeded by Severus Agemman as Captain of the 2nd Company. The Ultramarines erected a statue of Titus in the Hall of Heroes.[2]

At some point after the opening of the Great Rift, Titus was released by the Inquisition and returned to the Ultramarines. He passed through the Rubicon Primaris, becoming a Primaris Space Marine. While he returned to service with the 2nd Company, he was also demoted to the rank of Lieutenant.[5]

Titus is currently among the Ultramarines' forces that are defending an Imperial world from a Tyranid invasion.[5]