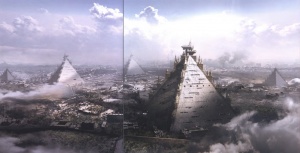 Tizca was the capital city of the world Prospero.

A Map of Tizca during the Fall of Prospero

Described as one of the greatest cities of mankind[1], Tizca (also known as the City of Light) was a center for knowledge and beauty. Dominated by massive pyramid shaped structures, Tizca was designed in a radial pattern from the center to maximize order and asthetic beauty. All buildings, even industrial structures, were designed to be functional as well as pleasing to the eye. The pyramids of Tizca were reflective, designed to mirror the sky to enhance the beauty of the city's skyline. Located on the coast, Tizca also had a large port for ocean vessels.[2e]

The part of the city closest to the coast was known as Old Tizca, an irregular layout of streets and buildings that existed before Magnus designed the rest of the city in a more orderly pattern. Old Tizca was built on a gentle slope that led down to the sea and was where many of the city's diversions were found.[2a]

Tizca was destroyed when the Space Wolves attacked under orders to censure Magnus for violating the terms of the Council of Nikea.[2b]

The city survived the initial planetary bombardment thanks to its kine-shields maintained by the Raptora Cult.[2c] The bombardment was followed immediately by a direct assault by the Space Wolves. The first landers were Stormbirds deploying troops at the seaside docks. The first invader ever to set foot on Prospero was Leman Russ, leading his Legion. The assault force landed with little resistance, as Tizca was protected by Legion assets as well as several layers of psychic defenses, and thus had no antiaircraft batteries for defense.[2a]

The fighting drove the Thousand Sons back until the last remaining members of the Legion were gathered at the Pyramid of Photep to stage a last stand. It was on the causeway to the pyramid that Magnus and Leman Russ met in personal combat and Magnus was defeated.[2d] This was the moment at which the Thousand Sons escaped total destruction and marked the end of the battle.

Magnus has since teleported much of Tizca to the Planet of the Sorcerers, rebuilding it into a warped monstrosity that is a sinister parody of what the City of Light once was.[3]