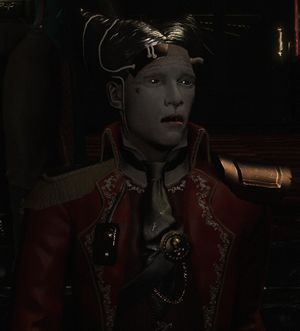 Tobias Maxilla was a Rogue Trader of the Imperium and a close associate of Inquisitor Gregor Eisenhorn.[1]

Raised by the Rogue Trader Vaden Awl and known for his extravagant dress, Maxilla was hired by Inquisitor Eisenhorn to help him pursue the Rogue Psyker Murdin Eyclone. During their battles Maxilla and Eisenhorn grew close, but he was injured as his the ship the Essene was subjected to a failed assassination attempt on Eisenhorn. His injuries revealed much of his lower body to be mechanical in nature. During the battle on the Essene against Radical Inquisitors Heldane and Leonid Osma who sought the Daemonhost Cherubael from Eisenhorn, Maxilla was grievously injured but with his last strength shot Osma with his pistol, saving Eisenhorn's life as he died.[1]