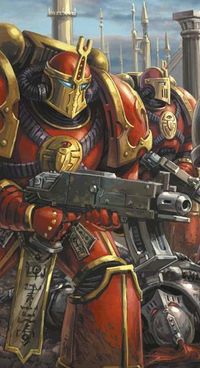 Tolbek during the Horus Heresy

Tolbek was a former member of the Thousand Sons legion. He was an Adept of the Pyrae Cult during the Great Crusade, and, after the Legion's escape to the Planet of the Sorcerers, one of the first members to join the cabal formed by Ahzek Ahriman to cast the Rubric of Ahriman.[1c] Tolbek was part of Ahriman's fellowship to reclaim the Shards of Magnus during the Heresy.[2]

After the Rubric's failure, the entire Cabal, including Tolbek and Ahriman, were exiled from the Legion.[1a] After his exile, Tolbek joined Amon's warband, The Brotherhood of Dust.[1]

The next time Tolbek met Ahriman again was thousands of years after their exile, aboard the captured ship Titan Child.[1a] The Brotherhood of Dust was searching for Ahriman, and Tolbek unknowingly encountered his former brother, traveling incognito with the warband The Harrowing, that had captured the Titan Child. Tolbek asked Ahriman to leave with him, and, when Ahriman refused, attacked him with a psychic blow. Ahriman deflected it and killed Tolbek and the Harrowing's leadership, leaving only a sorcerer named Maroth, Tolbek's two Rubricae bodyguards and himself as the only survivors in the room.[1c] In Ritual of the Damned, Tolbek somehow returns to Prospero. It's not explained if he was revived or brought back through time-bending sorcery.[3]