"These are all I've got. The last pitiful scraps of Tanith genestock, my only link to the past and the green, green world I loved. I'll keep patching and mending and binding and sewing them back together until they've all gone, or I'm gone, or the horizons of known space have withered and died."
- Dorden, to Gaunt.[1a] 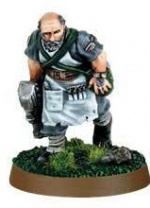 Tolin Dorden[2] was the Chief Medic of the Tanith First and Only regiment during the Sabbat Worlds Crusade.[1a]

A medical doctor in good standing upon the world of Tanith, Tolin Dorden trained at the Medical College in Tanith Magna.[2] His practice covered the Beldane District, including the inhabitants of the wider County Pryze area (where he was a member of the local acting troupe).[1a][1d][2]

After twenty-seven years of serving the citizens of his practice, Dorden found himself drafted into the Imperial Guard in order to make up the requirements for trained medical experts. His son, Mikal, was drafted alongside him and became an infantryman. Both of them escaped the destruction of their homeworld by dint of their service in the Tanith 1st, while Dorden's daughter and her own family all perished. The doctor's wife had passed away the year previous to the fall of Tanith.[1a][2] As a result of these facts and his nature as a doctor, Dorden believed passionately in the preservation and well-being of the Tanith soldiers under his care, as well as all those whose existences would "look out" for them. In this regard, he quickly came to respect the regiment's "outsider" commander, Colonel-Commissar Ibram Gaunt[1a]

When the First and Only were deployed on Nacedon, a unit of Tanith retreating from the rout at Lohenich came across a farmhouse that had been converted into a field hospital containing sixty-eight wounded Guardsmen of the Volpone 50th 'Bluebloods', who had been abandoned during the retreat. Despite General Muller's orders and reports that an army of Chaos Cultists was only half a day behind them, Dorden refused to leave the wounded men behind. Colonel-Commissar Gaunt relented and allowed a squad of Tanith to stay and defend the field hospital while Dorden and his orderlies Chayker, Foskin and Lesp tended to the wounded. Although the hospital was attacked by the cultists, the Tanith and Volpone were able to hold out until the Imperial counter-push the next day. Most of the wounded Volpone survived thanks to their efforts.[2]

Dorden's skills were unexpectedly called upon while the regiment was in transit to the Menazoid Clasp. The feud between the Tanith and the Jantine Patricians regiment resulted in several deaths and injuries amongst the men, including the serious wounding of Murtan Feygor, whose life was only saved when Gaunt was able to use his influence with the Captain of the Adeptus Mechanicus transport vessel they were aboard to gain a stock of more sophisticated medical supplies.[1b][1c]

Upon reaching the next theatre, the death world of Menazoid Epsilon, Dorden found himself attached to a hand-picked commando unit made up of both members of the regiment and Navy Intelligence.[1e] This unit ultimately destroyed a tainted Standard Template Constructor, amidst interference from agents of the radical Inquisitor, Heldane.[1f] During this action Tolin Dorden saved Ibram Gaunt's life when he used a borrowed laspistol to shoot dead an enemy agent who had the Colonel-Commissar cold. A snap-headshot with a pistol from a sitting position some distance away, the shot earned a compliment from the Ghost's sniper, Mad Larkin. Dorden commented that he just because he customarily refused to carry a weapon, it didn't mean that he couldn't use one.[1f] Dorden himself took a shot to the head before the mission was over, but from a laspistol so drained of power the energy bolt merely stunned the old man for a time.[1g]

Later, the Tanith were deployed on the Hive World of Verghast to defend Vervunhive from an invasion by the Ferrozoicans. On arriving in Vervunhive, Dorden clashed with Commissar Langana of the VPHC over the conditions of the regiment's assigned field hospital but received unexpected assistance from Surgeon Ana Curth, one of the hive's medical staff.[3b] Dorden and Curth would work closely together over the course of the Siege of Vervunhive, striking up a friendship.[3b][3c]

In the midst of the fighting, Dorden and Curth uncovered a murder committed by Guilder Amchanduste Worlin[3c], who had killed a number of Verghastite citizens at the start of the Siege whilst trying to escape a Zoican bombardment of the hive.[3a]

By the end of the Siege, despite an Imperial victory over the Zoicans, Vervunhive had been reduced to ruins and was declared formally dissolved by Warmaster Macaroth. Curth decided to accept the Warmaster's Act of Consolation, joining the Tanith First as a new medic.[3e][3f] However, she also had tragic news for Dorden, as she had discovered that his son Mikal had been killed in the fighting.[3d][3e]

While commiserating his loss, Dorden and Curth were confronted by Worlin, who at this point was trying to eliminate anything tying him to his murders.[3e] Worlin shot them with his needle pistol before being killed by Gaunt, but both Dorden and Curth survived the attack.[3e][3f]

Tolin Dorden was of smaller than average build, who sported a grey beard as well as a kind pair of eyes. He disdained the carrying of weapons.[1a]