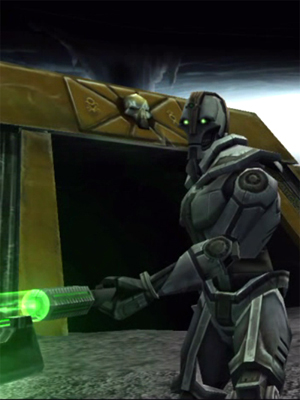 Tomas Macabee was a Pariah in service of the awakening Necron army on the planet Kronus during the Dark Crusade. Having somehow retained his personality after being remade, he now served as spokesman and adviser to the Necron Lord of Kronus, who preferred to remain silent throughout the campaign.[1]

Before his conversion by the Necrons, Tomas Macabee was an Professor of Archeology at Aceria Xeneology Institute. He was the leader of the Tau-funded El’eia Expedition team that accidentally awoke the slumbering Necrons beneath Thur'Abis Plateau. While most of the team were slaughtered by the Necrons, Tomas instead submitted to the immortal creatures and was remade into a Necron Pariah.[1]

Tomas Macabee's ultimate fate is unknown. However, it is likely that he was killed by a bomb planted deep within the Thur'Abis catacombs along with the rest of the Necrons, as the Blood Ravens' ending is canonical.[1]