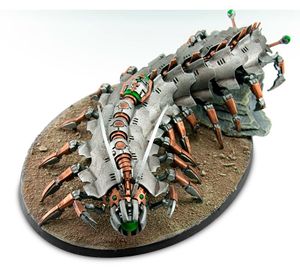 Canoptek Tomb Sentinels are Necron constructs used for guarding the confines of Tomb Worlds. Designed by the Cryptek master-artificer Toholk the Blinded, at the order of the Silent King the Tomb Sentinels were distributed to Triarch Praetorians for wider circulation across Necron Dynasties before the Great Sleep. Acting as both a guardian and attack construct, the Tomb Sentinel is a heavily modified Tomb Stalker, forgoing the Stalkers close combat capability in place of the Exile Cannon. The Tomb Sentinel is capable of phasing between realities, allowing them bypass the defences of lesser races and tearing them to pieces in close confines.[1]