The Tome Keepers are an Ultramarines Successor Chapter assigned to watch over Segmentum Pacificus.[4]

The Tome Keepers were founded in 546.M32 in the wake of the War of the Beast. The war had bled the Imperium's armies and a new Space Marine Chapters were desperately needed. Gene-Seed was taken out of cryo-storage and new samples received from all extant chapters. It was from Ultramarines’ gene-stock that Chapter 281 – later to be known as the Tome Keepers – was born. As with most newly created Chapters, officers and specialists were requisitioned from the parent Chapter. Captain Caelus Viator of the Ultramarines 2nd Company was made the first Chapter Master and he oversaw the creation and training of 400 battle-brothers over the following two decades on the training world of Dornak IV in Segmentum Solar. Their Serfs, fleet and vehicles were provided by Macragge. By 567.M32 the Chapter was ready for service.[4]

Assigned to watch over Segmentum Pacificus, the Chapter moved into the Caracros Sector, a sparsely populated region of space filled with Eldar Corsairs, Ork warbands, and Hrud. It was at the world of GB-6-77 (later known as Istrouma) that the Chapter would make its home. Though a forgotten footnote, the people of Istrouma welcomed the Imperials with open arms and hailed them as the mythical sky warriors of old. At the capital city of Niveneh the Space Marines met the planetary council and learned of the planets long history. There they learned that the life expectancy of Istrouma had fallen over the thousand of years and few now lived past the age of 30. Nonetheless each family dutifully crafted precious artifacts, passing it on to their successor once they died. The artifacts thus took on new meaning, representing the collective knowledge, skill, and will of entire generations. The Space Marines were then taken to the great library beneath Niveneh, witnessing aeons of knowledge. The contents of the library would shape the Chapter's future over the ensuing millennia.[4]

Captain Viator saw the planets value as well as the strategic benefit of Istrouma's accumulated knowledge and approved its conversion into a Chapter Planet. Construction on the Fortress-Monastery in the Zaatos Mountains began and to honor the event Viator was presented with one of Istrouma's greatest possessions: the White Book. From that day forward, Viator proclaimed that the Chapter would henceforth be known as the Tome Keepers. Viator observed the people of Istrouma's meticulous recording of information and saw its benefits for the chapter, fostering a culture that saw each Battle-Brother accumulate knowledge on their foes after each engagement. The Chapter has written countless books which are now added to Istrouma's libraries.[4]

The opening of the Great Rift was a trying time for the Chapter, who between the calamity and the war with the Thokt Dynasty were reduced to just 200 battle-brothers. Yet salvation came in the form of Roboute Guilliman's Indomitus Crusade and Primaris Space Marine recruits.[4] 120 Greyshields were left with the Chapter by Shield-Captain Jasek and the Chapter was reorganized to accomodate Primaris brothers. Existing warriors were elevated to the 1st and 2nd Companies while the 3rd and 4th took the bulk of the draftees. Captain Nasiem bal Tergu became the first member of the Chapter to cross the Rubicon Primaris.[4a] 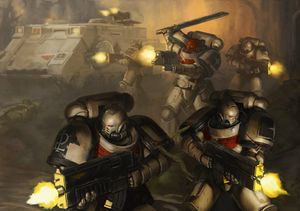 The Tome Keepers are renowned for their diligent record-keeping and strategic insights, particularly against Xenos such as the Necrons. After each battle, Tome Keepers meticulously record their observations of their foe and devise new tactics for their destruction. Their knowledge has shortened wars that the Administratum thought would take years.[4]

The name and insignia of the Tome Keepers, were inspired by an event that followed shortly after the Chapter's Founding, when they came upon their future Homeworld, Istrouma. After being welcomed on the world as heroes of legend, they were honored with stewardship of the most revered possession Istrouman's population. The Tome Keepers swore a solemn oath to protect it and have proudly borne the name ever since[3]. They then became historians and chroniclers, who record a critical and non-glorified view of the Imperium that is not influenced by propaganda.[1]

This aspect of the Chapter's heritage and culture, were taken from the people of Istrouma[3] , who live short lives due to the radiation given off by their white dwarf sun. Thus, to preserve their history and culture, the population became obsessed with recording every facet of their lives in great tomes for future generations to learn from and further maintain. As they did not have the benefits of elders surviving long enough to teach younger generations, these tomes have ensured that a continuity and order to their society has been able to continue. The Tome Keepers have inherited these traditions, and consequently, the Chapter would become compelled by history, knowledge and truth.[1]

They do not have good relations with the Imperium's institutions and this hurt the Tome Keeper's efforts to replenish their lost Battle Brothers and equipment. As a result, the Chapter once numbered only a few hundred, after suffering devastating losses both prior and after the creation of the Great Rift. Luckily they were found by a Torchbearers fleet and the Tome Keepers were given the tools to create Primaris Space Marines and a large number of Unnumbered Sons. As they began to rebuild themselves, most of the Chapter's surviving Space Marines were combined into the First and Second Company. A few veterans were promoted to Captains, and majority of the Chapter's Companies became mainly composed of Primaris.[2a]

The symbol of the chapter, the 4 pointed star, represents the white dwarf star of the Istrouma System while the book symbolizes the acquisition and recording of knowledge.[4a]

Upon conversion to Space Marines the previously short-lived Istroumans become near-immortal and many struggle with this dichotomy, feeling they are denied their rightful place among their ancestors. This feeling is echoed by the people of Istrouma, who see them as pariahs and living dead instead of glorious warriors. Tome Keepers are thus often sullen and introspective, but maintain a fearlessness of death and acceptance of mortality that surpasses even their own people.[4]

Where other Chapters may rely on aggression or firepower, the Tomne Keepers place emphasis on clinical discipline, superior tactics, and an understanding of the enemy. Alongside standard training its members are required to conduct detailed studies on the enemies of Mankind, to analyze all of the Chapters major engagements, and to become proficient in the Chapter's battle-cant. Each Battle-Brother is also encouraged to keep a journal of his own battlefield observations, furthering the knowledge of the Chapter as a whole.[4]

The Chapter places a strong emphasis on the traditions of Istrouma while upholding that science and reason should prevail over superstition and faith. Its warriors are thus scholars as well as soldiers and are known to be thoughtful and humanitarian by Imperial standards, often putting civilian lives before their own.[4]

Tome Keeper Librarians have developed the ability to psychically boost and empower the voice of another, enabling them to inspire and embolden their battle-brothers across great distances. Known as Amplification, often the Chapter's Librarians, Orators, and Ancients will congregate together to drive their warriors to greater acts of courage and valor.[4]

The selection process for the Tome Keepers is known as the Trial of Pages. Held on Istrouma on the first day of ever month, Aspirants are gathered from across the Istrouma System and led to Niveneh where they are pitted against each other in trials of strength and endurance. Only the very best are chosen and these Neophytes are known as Pages until their training is complete and they become full Battle-Brothers.[4]

The 3rd Company of the Tome Keepers is known as the Godbreakers have gained much fame as part of Indomitus Crusade Fleet Primus. Its current strength is known to be:[4a]