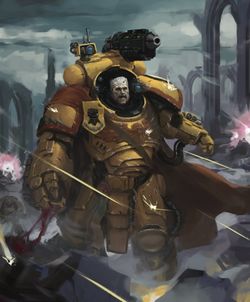 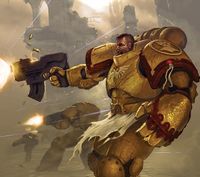 Recruited into the Chapter from the orbitals of Callisto, his wealthy family were glad to see him depart for fate had cursed him with a stubborn and straightforward nature. During his first decade of service Garadon earned high amounts of commendations but was not offered any promotions. Garadon earned a name for himself during the Nosfer Planetstrike, when the 3rd Company became stranded behind Necron lines under Lord Zangeneb. There, Garadon was forced to take command after his Captain Opara was killed and led 6 surviving Battle Brothers in rear assaults.[1c]

When Captain Julius Vogen took command of the 3rd Company, he saw Garadon's potential and promoted him to a position within the hallowed 1st Company as a Veteran Sergeant. Garadon later played a key role in the Invasion of Taladorn. In the aftermath of the battle Garadon became disillusioned with Lysander's reckless leadership which caused unnecessary casualties and contacted Chapter Master Vladimir Pugh, who had Lysander recalled to the Phalanx to stand before the Chapter Council.[1c] After Captain of the 2nd Garadon cultivated alliances and ties with many famous Space Marines such as Cato Sicarius of the Ultramarines, Colvane Brasch of the Invaders, Erasmus Tycho of the Blood Angels, and Draco of the Black Templars.[6]

After the Siege of Hydra Cordatus the 3rd Company was slain to a man. Garadon received permission to leave the 2nd Company and rebuild the 3rd. Many veterans of the Crusade of Thunder arrived to be transferred into the rebuilt formation under Garadon.[1a] Garadon was left on the Phalanx to rebuild the Company while Lysander and Vorn Hagan left with 5 Companies for a Crusade. However Warsmith Shon'tu assaulted the Phalanx in its vulnerable state, leaving Garadon and a small force of Imperial Fists to defend the vessel.[1a] Ultimately, Garadon's small force was saved by the Legion of the Damned. Garadon then arrived over Cadia and fought alongside Imperial defenders against Abaddon the Despoiler.[2]

When the Age of the Dark Imperium began, Tor Garadon led the Phalanx to Terra where he deployed a Company of Imperial Fists to help establish calm on the Throneworld following the Sack of the Lion's Gate. While on Terra he worked closely with Custodes under Valerian against Chaos Cults on Terra and later helped battle the Minotaurs following their participation in the Hexarchy's coup.[8] He later crossed the Rubicon Primaris and become a Primaris Space Marine.[3] Alongside Lysander he is now one of the last surviving Fists from before the formation of the Great Rift. Since the Indomitus Crusade began he nearly came to blows with Iron Hands Master of the Forge Feirros during the Battle of Xalladin.[4] 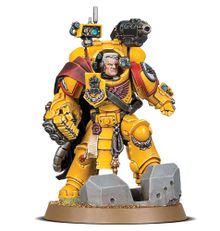