Torpedo is the name used for any long range missile carried by a space ship or used in a space battle.[1]

Some are used in local planetary defence networks[2c] while others can be launched from the planet surface, although they are required to traverse the planet's atmosphere.[2d] Anti-ship torpedoes are up to 200 feet in length and are powered by a plasma reactor, which makes up part of the warhead as well as the method of propulsion. Standard torpedoes move in a straight line and have limited sensing and targeting abilities, turning to intercept if they come within a few thousand kilometres of their target, although often they will still miss.[1]

Torpedoes are highly effective weapons in space combat. They are so small and fast that only defence turrets and fighters can catch and destroy them easily before they impact, although using weapons batteries, lances and Nova cannons can prove effective if the captain is desperate enough.[1]

Practically every race uses torpedoes, and they are often different from the "standard" torpedo familiar to Imperial Admirals.

The Imperial Navy's standard Torpedoes are armed with powerful plasma warheads[8], but also has several varieties of "special torpedoes" available in limited quantities:[6] 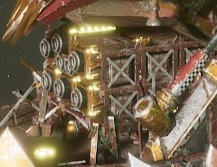 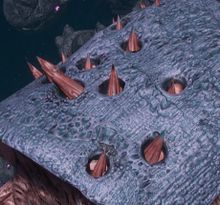 These are torpedoes used in one form or another by multiple races:[1]