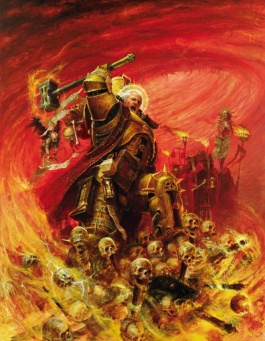 Torquemada Coteaz is a famous, feared and respected Inquisitor of the Ordo Malleus, titled "Lord Inquisitor" and "High Protector of the Formosa Sector".

Little is known about Coteaz's youth, or how he initially joined the Inquisition.

The incident that cemented his reputation and rise to prominence occurred during the Conclave of Varoth, called by Inquisitor Laredian, High Protector of Formosa. At the conclave, Laredian displayed a powerful daemon-bound crystal he had taken from a Chaos cult he had recently purged. He launched into an eloquent speech about how the crystal's powers could be used for the good of the Imperium by rooting out heretics and cultists. As Laredian concluded his address, Coteaz rose from his seat and marched to the centre of the auditorium, smashed the crystal with his Daemonhammer and declared Laredian a blasphemer and a trafficker in abominations, declaring him Extremis Diabolus.[Needs Citation]

This stunning act of impropriety threw the assembly into an uproar, until Coteaz produced an hourglass and promised to prove his accusations before the sand ran out. Laredian was forced to face his accuser, and in the examination that followed, it was revealed that he had not only sanctioned the use of daemonhosts, but had read proscribed texts and employed the tools of the enemy. Laredian was found guilty of heresy against the Emperor. He was executed by Coteaz himself, and his ashes were fired into the heart of a star. For his efforts in unmasking Laredian, Coteaz was named High Protector of Formosa, a position he had long coveted.[Needs Citation]

Some members of the Inquisition were apprehensive of his ambitious and rapid rise through the Ordo's ranks, but Coteaz's reasoning was that in order to best combat the enemies of the Emperor, he must be able to command. He continued to purge Chaos cults and other threats from the sector. For his destruction of a heresy on the Forge World Glovoda, the Adeptus Mechanicus gave him the Glovodan Eagle, a twin-headed psyber-eagle.[Needs Citation]

Lately, Coteaz has cast his interest over the worlds of the Formosa sector. Yet even as he finds new successes, he has come to realize that he is now an old man and fears that leaving his work undone without a successor will make his struggle futile. Thus Coteaz has begun to search for forgotten fragments of cloning lore and alien rejuvenation technology, any means of extending his life save those Daemonic in nature. Nonetheless he knows that summoning a Daemon and using it to extend his life given the proper ritual could be easily granted, and despite a small part of him wishing to embrace this, he has thus far resisted the temptation.[1]

During the Cleansing of Opridia in 972.M41 Coteaz purged the Daemonhosts and killed Daemon Prince Karpathi the Occludor with help of the Exorcists Chapter.[3] In this conflict he used a Chimera of Inquisitorial Storm Troopers, which was enscribed with a line from the "Exorcism Deus Abominatus".[4]

During the 13th Black Crusade, he lead strike forces of Grey Knights against Daemons in the Agripinnaa Sector as well as on Kasr Holn and Xersia.[2]

Coteaz wears ornate Artificer armour incorporating a refractor field and is armed with an anointed Daemonhammer and a Bolt pistol. The Glovodan Eagle has been augmented to act as his eyes and ears on the battlefield.[Needs Citation]

Torquemada Coteaz is an reference to the Spanish Inquisitor General Tomás de Torquemada — who, like Coteaz, is known for being zealous as well as incorruptible. 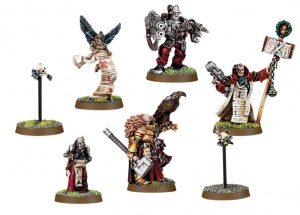