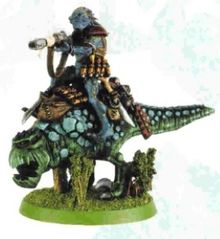 A Tracker Kindred is a Kroot kindred which serves as mounted scouts for Kroot mercenary bands.[1]

Riding on Knarlocs, a Kroot strain native to the jungles of Pech, they are experts at hunting targets through dense jungle undergrowth thanks to the tracking abilities of their mounts and can infiltrate behind enemy lines. These kindreds also function as light cavalry during battle, harassing at range or charging into exposed flanks depending on the situation. Each kindred consists of between five to ten Kroot, including a Shaper, armed with Kroot Hunting Rifles and whatever gifts granted to the Shaper by their employer.[2][3]