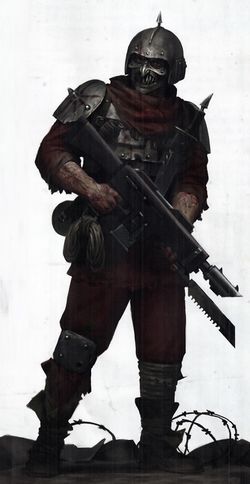 Traitor Guard (or guardsmen) is a term given to the vast majority of disloyal mortals who have left the Imperial Guard and Planetary Defence Forces in order to fight for Chaos. They are not a single coherent force, but rather a faction of the infinite collection of warbands and hosts under the leadership of Chaos Champions and part of the The Lost and the Damned.

In order to fulfil their own agendas, Champions of Chaos draw lesser Chaos followers to them to form their own personal armies, which can vary tremendously in size and strength. The Traitor Guard are among the better armed and minded troops that Chaos Champions and/or Arch-Heretics have at their disposal. Like other Imperial military deserters who have turned from their Emperor and fled from Imperial justice. Occasionally entire companies, or even regiments of the Imperial Guard turn to Chaos, and take with them their vehicles and armoury.[1a]

These traitors, unlike other mutants and other vile Beastmen, have not completely lost their military skills or sanity, forming a reasonably reliable core force amongst the slavering hordes of the Lost and Damned armies. Often these mortal guardsmen will fight alongside mutants or Daemons of the warp by summoning them by way of blasphemous rituals. Their allies are complemented further with monstrosities of all kinds, such as Chaos Spawns, hordes of mutants and Beastmen, and packs of Chaos Hounds.[Needs Citation]

When Guardsmen betray their Emperor it is not just themselves who leave to fight for Chaos but their vehicles and equipment as well. Rough Riders, as well as Imperial Guard vehicles such as Leman Russ Battle Tanks, Hellhounds, Basilisks and Sentinels are known to be in the service of Traitor Guard armies too.[1b] Traitor units are also known to use Chimeras and Space Marine Rhinos for transportation.[1c] 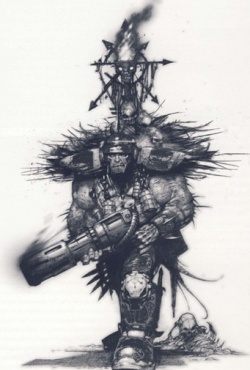