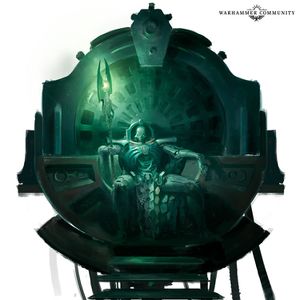 "I chop out the mechanisms of occurrence and study them at my leisure. This history of this galaxy is an open book to me, and my collection is the story of everything."[10a]

Trazyn the Infinite is an ancient Necron Overlord of the Nihilakh Dynasty[8] noted amongst his kind as a keeper of history and a preserver of artifacts and events on the Tomb World of Solemnace.

Before Bio-Transference Trazyn was a Necrontyr scribe and Chief Archivist who oversaw the mummification of Necrontyr Phaerons. He can not remember much detail of his past life due to self-installed protection protocols.[12] Trazyn misremembers much of the past he can recall, such as insisting he was physically forced into Biotransference when according to Orikan he had embraced it.[12c]

Trazyn awoke from the Great Sleep prematurely and during that time sought to expand his collection, pledging that he would one day share it with the rest of his race when they fully awoke. Trazyn is officially a member of the Nihilakh Dynasty but largely operates independently.[2c] He has alienated himself from many members of his race and is known to be persona non grata to the Sautekh Dynasty while he is only barely tolerated by the Nekthyst Dynasty in exchange for his services.[13]T

Trazyn's philosophy of preserving the past is in stark contrast to the Cryptek Orikan the Diviner's hope of changing it for a better future and the two were hated enemies even in life.[12] The two fought over access to the Tomb of the legendary Necrontyr Overlord Nephreth on Serenade for nearly 10,000 years. Though they were forced to reconcile and join forces after discovering they had both been duped by The Deceiver, Orikan still vows revenge.[12d]

He is known to hold technologies and relics that are so rare as to be priceless. Trazyn's nature means that he is loathe to explore the galaxy himself but his desire to gather exquisite artifacts to both see and cataologue forces him to go out amongst the stars, when there is an opportunity he cannot afford to miss. Furthermore, he is known to often send substitutes of himself to do his work for him and many have become annoyed to discover that the Necron they had slain who they believed to had been Trazyn was in fact a Lychguard or a Necron Lord. On such occasions, the real Trazyn works to break through his enemy's opposition in order to get his hands on his latest prize to add to his collection.[1] Trazyn has tried twice to obtain the Spear of Vulkan from Salamanders Forgefather Vulkan He'stan. However he was defeated in personal combat by He'stan, and later foiled once again in the Tochran Crusade.[5]

Sometime later, Trazyn journeyed to Harmony in search of new additions to his collection but was wounded by Eidolon. In exchange for his safe passage, Trazyn offered a lost Gene-Seed tithe of the Emperor's Children that was part of his collection. This caused Eidolon to dispatch Fabius Bile and Flavius Alkenex to Solemnace to retrieve it. Also part of the bargain was Fabius Bile himself, who Trazyn desired to add to his collection. However on Solemnace Bile was able to bargain his freedom and acquire the gene-seed tithe for himself by offering first Harlequins and then Fabius' clone of Fulgrim as well as Alkenex and his Emperor's Children.[10b]

During the Thirteenth Black Crusade Trazyn's collection on Solemnace was thrown into upheaval. This provoked the Necron lord into investigating the cause via the Celestial Orrery, where he discovered that Pylons were holding back the tide of the Warp on Cadia. Not wishing to see Chaos spread throughout the Galaxy and perhaps searching for new items of his collection, Trazyn ventured to Cadia and aided the Imperial defenders there. On Cadia Trazyn worked with Belisarius Cawl in activating Cadia's Pylons but ultimately could not prevent the destruction of the planet. As Cadia died, Trazyn took part in the final battle against Abaddon and unleashed much of his collection against the Black Legion, but seeing that Cadia was doomed he promptly teleported away.[7] Trazyn has since begun prying for information from his captive shard of The Deceiver on how to enter the Great Rift.[12c] 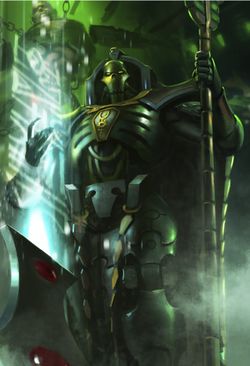 Trazyn carries a clutch of Mindshackle Scarabs and wields the Empathic Obliterator which is an ideal weapon for his purposes, as he disdains exhaustive physical combat and far prefers a single telling blow at the opportune moment.[2b] Trazyn is capable of a variety of other means of defense, such as manipulating his own Necrodermis into weapons and entrapping his enemies in stasis fields. Should his body be destroyed, he is promptly downloaded into a new form. He has complete control over his Necron Legions, able to stream his consciousness into any of his warriors.[12]

Trazyn the Infinite possesses a enormous variety of items in his collection among them are: