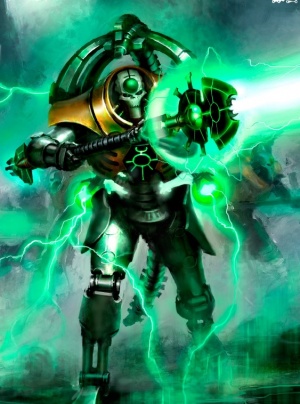 Triarch Praetorians are the former bodyguards and agents of the Triarch, the ruling council of the Necrontyr. Now, they are Necron rapid-assault infantry equipped with anti-gravitational packs. As of late M41 they have pledged their loyalty to the newly returned Silent King, and seek to unify the Necrons in the face of the Tyranid threat.[3]

They hold a great responsibility - to ensure that the Necron Dynasties never fall. Triarch Praetorians are the only type of Necrons to have remained awake during the long hibernation of the Necron race that took place after the War in Heaven[1]: they view the outcome of the war as a failure, and they chose to forsake hibernation as penance, preserving what they could of their culture and readying the galaxy for the time when the Necrons would rise again to reclaim it.[1]

Triarch Praetorians carry the responsibility of ensuring that war and politics are conducted in accordance to the ancient codes. They were outside the political structure, and could force their will upon anyone if their behaviour went against the edicts of old, even a Phaeron. Whilst waiting for their brethren to awaken, many disguised themselves as gods upon more primitive worlds, preaching about the codes of the Necrontyr, shaping their cultures according to their own ideals. Despite many attempts by the Eldar of Craftworld Alaitoc to make the Praetorians fail in their mission, fragments of their lore and archotech still survive on many worlds. With their brethren awakening, they now work fervently to track down any tomb worlds they can find, and make sure that once again, the ancient codes will be upheld. A host of Triarch Praetorians will be assigned to an awakened Tomb World in perpetuity to ensure that it is so. Not even a Phaeron would deny this intrusion of the Praetorians, for even should he object to their influence, he would value their battlefield capabilities: sixty million years has done little to dull their effectiveness.[1]

Equipped with the dreaded Rod of Covenant, they rarely join a battle immediately, rather specializing in hovering over the battlefield before hurling themselves into the heart of the enemy army.[1] While above the fray, they will watch not only for the opportune moment to strike, but for a sign that it was long-ago touched by their influence. Should they discover such a race, they will deem that it has the right to be fought as an honorable foe according to the old codes of battle. A Necron army's commander may find this a frustrating setback, impeding the progress of battle, but only the boldest Nemesor or commander would dare to blatantly challenge the Praetorians' edict.[1]