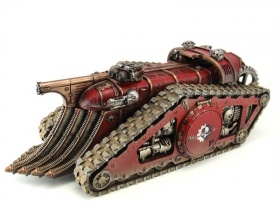 The Triaros Armoured Conveyer is an armored vehicle of the Adeptus Mechanicus. The primary transport of Mechanicum troops during the Great Crusade and Horus Heresy eras, it relies on a number of unique technologies and never divulged to the greater Imperium, even by the Adeptus Astartes.[1]

Designed for use in hostile environments, it incorporates multiple galvanic traction drives and its defenses are comprised not only of heavy armour but also layered techno-cant wardlings and interlocking energy shields. Armament consists of independently animated Weapons Servitors. equipped with Volkite Sentinels and a Mauler Bolt Cannon. Its storage bay can be hermetically sealed if needed, allowing the Triaros to be used in the hard vacuum of space and on the surfaces of lifeless worlds. Its internal bay is outfitted with numerous specialized couplings for recharging, cold-sleep storage, and servicing Tech-thralls and light Automata if needed. Its most remarkable feature however is a powerful reactor-fed Shock Ram mounted to its fore, which can be used to shatter and incinerate anything it contacts.[1]

An assault variant of the Triaros, the Karacnos, also exists