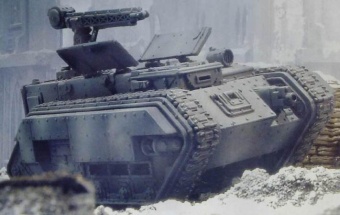 The Trojan Support Vehicle is an Imperial Guard logistical support vehicle based on the Chimera chassis. Built on hundreds of worlds throughout the Imperium, the Trojan is primarily a towing tractor and supply vehicle not meant for battlefield deployment. In addition to carrying supplies within their hulls such as food, ammunition and spare parts, it can carry additional supplies in specialized trailers or tow artillery pieces into position. It has earned many affectionate nicknames from the Guardsmen it serves such as 'the Mule', 'the Drey', 'Draggin' wagon' and 'Mud-hog'.[1a][2]

The Trojan is easy to manufacture, highly dependable, efficient in its role and easy to repair in the field thanks to its use of the same basic chassis and engine in common with the Chimera. Unlike the Chimera the Trojan lacks heavy frontal armor, along with other combat-focus features such as medi-packs and targeters, with the extra space given over to room for supplies and a heavy-lift crane. The crane is strong enough to lift heavy objects from within the Trojan's hold and tow a range of supply trailers, of which the three main types are a large fuel tanker, an armoured ammunition trailer and a general supply trailer. It is also capable of towing large equipment such as Weapons Platforms, although it lacks the power to tow other armoured vehicles, so it can't be used as a recovery vehicle, a task best left to the Atlas.[1a]

Although not meant for battlefield deployment, there have been occasions when Trojans have been converted into combat vehicles, normally out of desperation. Some examples of these field refits include attaching Autocannons to provide anti-air defence, bolting on extra armour plates to create an armoured carrier, adding communications equipment to make a specialist comms vehicle, and turning it into an engineering vehicle with Mine Sweepers or a light bridge layer. Though it is not permit by the Adeptus Mechanicus the Commanders often dare to modify the Trojan for field needs than to fail in the eyes of their superiors or Commissars. Trojans are never as successful as their authentic counterparts, but they often do the job when the alternatives are unavailable.[1a]

However, these amphibious vehicles are equipped with a measure of self-defense for delivering supplies and artillery in the heat of battle. This comes in the form of a hull-mounted Heavy Bolter, which in some models is replaced with a Heavy Flamer. Other modifications include a Searchlight and Smoke Launchers, a pintle-mounted Heavy Stubber or Storm Bolter, Camo Netting, Dozer Blade, Extra Armour, even a Hunter-Killer Missile.[2]

There are many variants of the Trojan design used on the battle front. These can be used as communication vehicles, ambulances, mobile kitchens and engineering vehicles such as mine sweepers and bridge layers.[3a]

"Vanahiem" presumably is a misspelling of the Forge World Vanaheim.

For unknown reasons the descriptions for the Trojans of the Konig 9th Heavy Tank Company and the Krieg 28th Armoured Regiment were switched between Imperial Armour Volume One - Imperial Guard and Imperial Navy[1a] and Imperial Armour Volume One - Second Edition: Imperial Guard[7b]. This presumably was not a mistake but a deliberate decision as the "grey" Trojan was also modified with a stencilled-on "Krieg" inscription on the back of the vehicle.