Imperial Transports are the merchantmen, freighters, and support vessels that ply the space lanes, carrying the trade that is the lifeblood of the Imperium. From the dozen or so transports of a single planetary invasion[2] to the hundreds - or even thousands - that participated in the Gothic War[1a], the humble transport is as vital to victory in a conflict as the mighty Battleships that they supply.

Though slow, ungainly, and poorly-armed, transports are often called upon to defend themselves in battle. Fighting against impossible odds, such battles invariably result in heavy losses to the transports, as they simply cannot match up to a dedicated warship.[1a]

Chaos forces often rely on hijacked Imperial transports, as they seem disinclined to build something as mundane as a food-hauler. Crewed primarily by pirates, cultists, and renegades, these captured ships will begin to show signs of the warping influence of Chaos after enough years under their dark new masters.[1b]

Notable Imperial Transports include the Son of John.[Needs Citation] 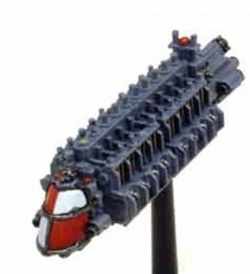