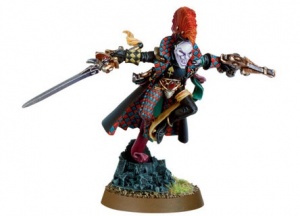 Avatars, also called Athairs or Troupe Masters, are the leader of Harlequin Troupes.

This status will be marked out by their wardrobe and equipment choice, as well as the possession of a number of small batons which unfold into a flag representing the Harlequin masque the troupe belongs to (if any). This flag is generally left behind after an action, as a 'calling-card'. On the stage, Avatars play the part of the Laughing God himself.[1]

Troupe Masters are closer to the lead players of a cast than formal commanders; they are elevated by will of their comrades, playing their role until it is time for another to take their place. They act as exemplars for all their Troupe's key characteristics, embodying everything it means to be Light, Dark, or Twilight writ large. Thus Troupe Masters of light will hurl themselves into battle like the headstrong heroes of myth, adopting protagonist roles such as the Duke of the Hidden Realm or Eldanari Prince. Troupe Masters of the Dark by comparison are sinister and vindictive, always seeking some way to flamboyantly finish off their foes. Meanwhile Troupe Masters of the Twilight, see cycles of transition in everything, often seeming obsessive or insane in their attention to nuance and detail until the precise moment of genius reveals itself.[3]