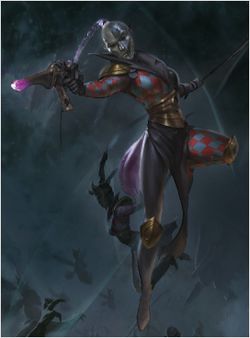 Troupers, also called Rilletann, are the the most numerous Harlequin warriors. The main body of any company of Harlequins will be troupers, who perform as the chorus on both the stage and battlefield.[1]

They choose a Light, Twilight, or Dark role, and are led by a Troupe Master, Each Harlequin belongs to one of three type of Troupes :[3b]

Every Trouper wears a mask to conceals their identity while evoking the character whose role they play. A Harlequin’s mask can change its features by the moment, displaying shifting features to aid their performance. In battle, those who look into the mask of a Trouper see their worst fears reflected back at them, an inescapable psychoresponsive bombardment that distracts and terrifies in equal measure.[3c]

Amongst the Troupe are certain Players, known as Virtuosos, whose roles emphasise the use of specialist weaponry, the better to unleash elegantly hideous destruction.[4]

Harlequins play many different roles over time, changing masks and aspects time and again. Those perfecting their first role are known as Mimes.[4] 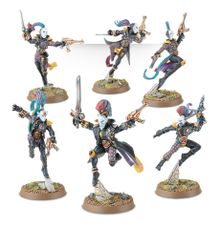