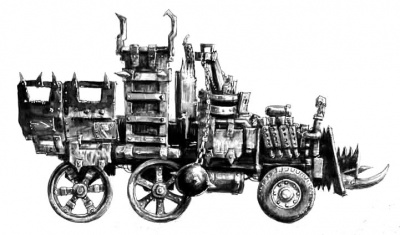 A Wartrukk is an Ork vehicle primarily used for transporting Orks across the battlefield at breakneck speeds.

Because Orks don't really have much of a concept of personal space, Wartrukks are often piled with as many Orks as won't fall off, if even that. Sometimes they have runners mounted on the sides of the Trukk so more greenskins can cling on to the sides and get stuck in faster. Some of the more intelligent Orks wait for the Trukk to slow down some before jumping off said runners. Wartrukks are usually armed with Big Shootas on the front, as well as some rather spikey bullbars so the drivers don't miss the thrill of close combat. The Wartrukk serves well to be launched into battle guns blazing, to unload a heap of greenskins into the fray. Because of Ork inventiveness and little in the way of standardization, no two Wartrukks ever look quite the same.[1][2a]

Wartrukks are built for speed and speed alone, and usually have little in the way of armor plating.[2c] They wield a wide variety and combination of weaponry, including a Big Shoota, Stikkbomb Chukka, Grabbin' Klaw, and Wreckin' Ball.[9]

Some Orks, particularly Bad Moons with bags of teef, have been known to strap rotor blades, jet engines and even grav plates to their trukks, creating an 'Ovvertrukk that skims along the ground rather than using wheels.[7]

A Trukk equipped with a large wrecking ball.[8]