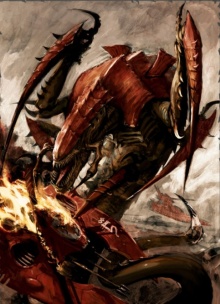 A Trygon is a monstrous serpentine species of Tyranid capable of tunneling through just about any material - carving out underground tunnels that can be used by other Tyranid creatures to bypass enemy lines. For the enemies of a Trygon, an attack from below is incredibly hard to detect and even harder to defend against. The emergence of a Trygon will often herald a larger Tyranid attack as hordes of smaller creatures pour out after it using the freshly created tunnel.[1] It appears that Trygons use their bio-static charge to assist with tunnelling, as their tunnels have been found coated with a fused, glass-like silicate layer on the inside. This effect stabilises the tunnel walls and prevents them from collapsing behind a burrowing Trygon.[4]

Trygons have also been known to dig deadfall traps by leaving a thin crust over a deep conical hole. Sufficient weight in troops and armour will collapse the roof of the sinkhole and deposit the victims into the Trygon’s waiting claws. A Trygon’s greatest weakness is probably that it can be baited or misdirected while burrowing by the first tasty morsel to cross its path.[4]

A Trygon is also heavily armoured in shifting carapace plates that generate a bio-static charge as the creature moves. Known as a Bio-Electric Pulse[1], this energy can be channeled into a sudden powerful arc that is strong enough to kill by exhaling an ionised spray from its gills.[1]

A Trygon Prime is a variation of the Trygon modified to wield Containment Spines running the length of their bodies that can better harness their bio-electric buildup and further direct it into a more terrifying lightning bolt. They are also adapted to share a synaptic link with the Hive Mind, allowing them to influence lesser Tyranid creatures.[Needs Citation]

Instead of generating individual bio-static fields, Trygons can work in a Bioshock Brood to combine and greatly amplify their own charges into a single bioelectric field covering the whole brood. Lightning arcs from beast to beast with a build-up of power so great that the generated field can disrupt, absorb, and even deflect incoming enemy fire. When released it has the power of a raging tempest which reduces targets to charred corpses. Tell-tale signs of an imminent surfacing from a Bioshock Brood include hairs standing on end, the tang of ozone, or unusual electronic static through comms channels - though these warnings usually go unnoticed.[3]