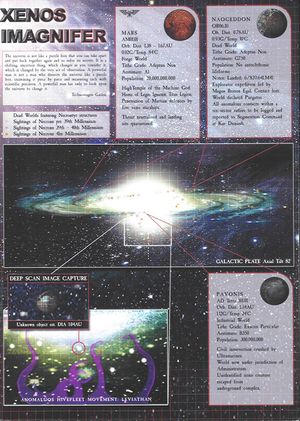 The implied tomb worlds of the C'tan[1f]

Tsara'noga, also known as the Outsider, is a C'tan worshipped by the Necrontyr, and later the Necrons.[3]

The Outsider is an insane C'tan whose gaze causes madness and despair wherever it fell. Those in its presence would rather take their own lives than endure its hellish presence.[1b]

According to Eldar legend, during the War in Heaven the Outside and the Eldar trickster god Cegorach engaged in duel. As the Outsider, accompanied by four lesser C'tan devoured the stars, Cegorach appeared before the Outsider as challenge. Casting an illusion of itself upon the lesser the C'tan, the Outsider proceeded to mistakenly devour its brethren one by one. Screaming with rage and defeat, the Outsider clutched its head, spasming until it folded upon itself and grew dim.[3]

Another retelling of this tale states that when the Laughing God deceived the Outsider into devouring its brothers, because it thirsted for ascendency. However, the devoured fragments twisted like shards of glass within the Outsider eventually driving it insane. This earned Cegorach the enmity of the Outsider, who shall one day return.[1b]

A sacred text of Iyanden, sent by Inquisitor Bronislaw Czevak to Inquisitor Maturin Ralei, describes what is perhaps the Outsider as having been ensnared by chains of Kesnous.[6]

An approximately five million year old prophecy inscribed by Farseer Lsathranil of Ulthanesh Shelwé claims that when the living dead rise, and the galaxy runs red with the blood of Eldanesh (Eldar), shall the four great C'tan rise. The Outsider will then return, being drawn to the fresh harvest.[1a]

The Outsider may appear as a C'tan Shard.[4] 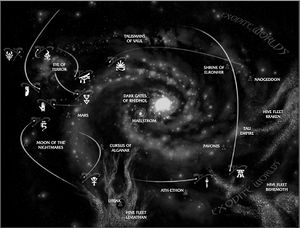 The site of Lyriax corresponding to unknown object[5]

The Outsider is said to have gone into exile outside the Galaxy since then, living within a hollow planet far to the galactic south.[2]

Joagul Maskelyne, a serviceman of the Imperial Navy encountered the astrological engines and twisted geometries of the Outsider as his naval ship exited the Immaterium near the edge of the galaxy. The experience had weakened his sanity and his will to live. His report has been compiled with another report noting an unusual change of course by Hive Fleet Leviathan. No known celestial phenomena is known to exist in the location of the Hive Fleet's manoeuvre. However, auguries revealed a spherical object of unknown origin. The mere ability to have detected it with reflected light indicated either a measurement 32,000,000 times the size of Terra or an albedo range approaching infinity.[1e]

A deep scan image of an object to the galactic south showing a dyson sphere-like has been captured, with the movement of Hive Fleet Leviathan turning course to avoid this unknown object.[1e] This object corresponds to the Eldar-monitored site of Lyriax.[5]

In a vision of the universe's doom, Farseer Maechu of Ulthwé has seen the writhing, inverted geometries of the Outsider curl and tighten around its harvest as they clamber and crawl like vermin around his illogical labyrinth. Its prey have long since lost their sanity save for the false hope that they may escape, with the Outsider seeking to quell this hope.[1d]

During an interrogation, a mad Heretek Adept Corteswain claims to have seen the Lord of Insanity dwelling in a world within a world.[1c]