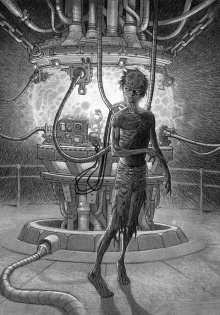 The Tuchulcha speaking through the corpse of a dead child

The Tuchulcha Engine is an ancient sentient device and possible Warp entity. Of unknown origin, Tuchulcha is part of a triumvirate of similar entities (Ouroboros and Plagueheart) which when combined can create a rift that bridges space and time. On its own, Tuchulcha is capable of extremely efficient, precise, and accurate Warp jumps.[1]

During the Horus Heresy, Tuchulcha was discovered by Lion El'Jonson in the Perditus System after Death Guard under Calas Typhon, which also sought the artifact. The Lion prevented Calas Typhon of the Death Guard from acquiring the engine for his own twisted ends and was determined to use it to defeat the Night Lords and their Primarch, Konrad Curze. Lion El'Jonson began to frequently converse with the Tuchulcha in the aftermath of the battle, confiding with it above all others.[3] During the attempts to breach the Ruinstorm and reach Terra, Tuchulcha demonstrated the limits of its abilities. It honestly told the Lion that it could not navigate the storm to Terra on its own, frustrating the Lion.[4]

At some point towards the end of the Heresy, Tuchulcha became embedded within The Rock.[1]

Much later in the 41st Millennium, Cypher revealed that Tuchulcha was embedded within The Rock and that the Dark Angels dark history of The Fallen could potentially be changed by finding the other two engines and changing history. He also warned that Astelan and Typhus both sought the engines as well. Eventually all 3 devices were gathered, and a warp rift was summoned over the ruins of Caliban. Convinced by Ezekiel to leave history be and trying to prevent nearby Fallen forces from accessing the rift first, Azrael destroyed the rift and presumably the three devices.[2]