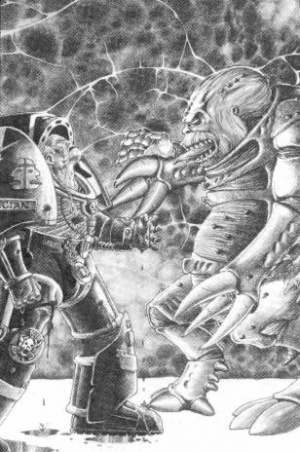 Two Heads Talking, who assumed the name Lucian when entering the chapter, was a Librarian of the Dark Angels.

He once participated in the uncovering and annihilation of a Genestealer Cult on the hive world Thranx. During a recruiting campaign on his homeworld many years later, he realized it to be infiltrated by a Genestealer Cult as well. After killing the Genestealer Magus of the cult, he was heavily injured and brought before the Genestealer Patriarch, whom he identified as a surviving Genestealer from Thranx. The ensuing psychic duel claimed both of their lives. The remaining Genestealers and Genestealer Hybrids were wiped out by the Dark Angels' First Company under command of their Captain Cloud Runner.