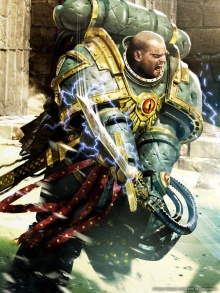 Tybalt Marr, known as The Either, was the Captain of the Sons of Horus 18th Company [1a] during the Great Crusade and Horus Heresy. He was often seen alongside 19th Company Verulam Moy, also known as The Or.[1b]

Both were 'Sons of Horus', the term for those Luna Wolves Marines who looked facially similar to their Primarch Horus. While their similarity in appearance to Horus was notable, the similarity between each other was so striking that they were considered almost twins by their fellows. This carried on into their respective nicknames, 'The Either' and 'The Or', due to the belief that they were so hard to tell apart they may as well be interchangeable. Tybalt Marr was referred to as The Either while Verulam Moy was called 'The Or.'[1]

In fact, Moy and Marr worked so well together that it was habit, circumstances permitting, for their companies to be sent into battle alongside each other. This was not always possible due to the Wolves' practice of drawing lots to see which companies would go on missions when a smaller force than the total present was required. Two such occasions were the initial combat drop on Murder, where Moy won a place and Marr did not, and again on the mission to the moon of Davin, where Moy led the force's Devastator contingent.[2]

Following the death of Moy on Davin's moon, Marr was considerably affected by the death of his friend and comrade. After visiting the scene of Moy's death in the aftermath of the battle he became withdrawn and reclusive. A long-time holdout, he eventually joined the warrior-lodge within the Legion on the eve of the Horus Heresy, being inducted by the Warmaster himself.[2]

During the Horus Heresy, Tybalt Marr fought at Isstvan V and later defeated the loyalist Shadrak Meduson in the Battle of Arissak, after which he persuaded Horus that the Shattered Legions were a serious enough threat to merit a forceful response from the Sons of Horus. The Warmaster granted Marr command of a task force with a mandate to eliminate this threat to his rear.[3] A bitter cat-and-mouse game quickly developed between Marr and Meduson which culminated in the Battle of the Aragna Chain, where Marr was able to finally capture and execute the Iron Hand aboard his flagship Lupercal Pursuivant.[4] Later in the Siege of Terra, Marr was part of the Mournival-led assault underneath the Saturnine Gate. However his squad was ambushed by a kill-team led by Garviel Loken and quickly annihilated. Marr was shocked to see Loken before being slain.[5]