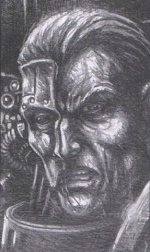 Tycho took charge of the 3rd Company when his predecessor was slain during the Second War for Armageddon. He nearly suffered the same fate himself during a clash between his troops and a small Ork warband in the jungles that separated Armageddon Prime and Armageddon Secundus. Early in the combat, which the Blood Angels eventually won, Tycho was the victim of a deadly psychic attack by an Ork Weirdboy and was left for dead.[1][6]

Tycho wore Artificer armor incorporating an Iron Halo and carried Blood Song (a special Combi-meltagun), along with Frag and Krak Grenades. He was also equipped with digital weapons which made his close combat attacks especially devastating.[6]

The gauntlet he once wore is now a Blood Angels relic known as the Dead Man's Hand.[8]