Tylos Rubio[3a] was a Battle brother of the Ultramarines' 21st Company during the Horus Heresy and the first recruit Malcador sent Nathaniel Garro to gather for the Knights-Errant.[1f]

Ultimately, Rubio became Koios, one of the founding members of the Grey Knights.[6]

An extremely powerful psyker, Rubio was originally a Codicier of the Ultramarines Legion, before the Emperor's Decree after the Council of Nikaea banned the Space Marines' use of psykers. Rubio resented the Decree, but honoured his oath to the Emperor and surrendered his Psychic hood and Force sword, and returned to the lines as an ordinary Battle brother[1a].

While the 21st Company and the rest of its Chapter were being mustered on Calth for war against Orks, Rubio and the other lapsed psykers felt a brief disturbance, caused by the approaching Word Bearers' rituals, which would eventually summon a horde of Daemons onto Calth. In their determination to obey the Decree, Rubio and these other psykers said nothing, attributing the feeling to an ordinary headache, caused by fatigue. Rubio would regret this decision until his dying day[3b].

During the Word Bearers' surprise attack, the 21st Company was almost wiped out in their initial attack, and retreated to a railway tunnel leading to the planet's capital, Numinus[1b]. In subsequent battles with cultists and Traitor Space Marines, the Company's Captain was killed[1c]. Before the traitors' next attack was launched, Nathaniel Garro arrived and told Rubio that they must leave, on the orders of Malcador the Sigillite. Rubio refused to abandon his brothers, even in the face of what was, effectively, a direct order from the Emperor himself. To his surprise, Garro agreed to stand with him against the Word Bearers[1d].

During the next, overwhelming assault, the Ultramarines were driven back, away from cover and in danger of being slaughtered by the Word Bearers' Terminators. Rubio had already been severely tested by being forced to restrain his psychic powers, even when they would have saved the lives of his brothers. Finally pushed over the brink, Rubio unleashed the full measure of his powers, driving the enemy back, and collapsing the tunnel over the attacking Terminators[1e]. The Ultramarines were saved, and the passage to Numinus had been permanently denied to the enemy, but Rubio was instantly shunned by his battle brothers for breaking the Emperor's decree. Garro demanded an oath of moment from Rubio, who bitterly accepted that he could no longer call the Ultramarines Legion his home[1f].

Ironically, the Ultramarines' Primarch, Roboute Guilliman, had already decreed, aboard his ship in orbit above Calth, that Nikaea had hamstrung the Ultramarines' ability to combat the daemons rampaging across Calth, and that his first order of business after the battle would be to see the Emperor's decree abolished and the Librarius reinstated[3c].

With Malcador's consent, Rubio was re-equipped with a Psychic Hood and was given full reign to use his psychic powers in Garro's service. Whether this was a step towards repealing the Decree of Nikaea was not resolved[2a].

Approximately a year after his recruitment on Calth, Rubio accompanied Garro and Macer Varren to Isstvan III to find the last warrior Malcador was seeking. Garro noted that Rubio was still not comfortable with his new role, but as a true Ultramarine, stoically did his duty; by contrast, Varren was restless and often expressed his discomfort in fits of temper[2b]. Serving with Garro, Rubio suspected his secret faith in the Emperor's divinity, and sternly reminded him of the same lesson Garro had taught him: that their to duty to Malcador must outweigh all other considerations[2c].

Rubio's psychic talents allowed himself and Garro to survive when their quarry, an Astartes calling himself "Cerberus" ambushed them and collapsed a ruined building on them with a Krak grenade[2d]. Later, examining the corpses of human refugees gunned down by Cerberus, Rubio called Garro's attention to a strange mark that the former Death Guard recognized as the Mark of Nurgle. The three Astartes were attacked by corpse-mutants, which they fought off with difficulty[2e]. Rubio survived the battle and accompanied Garro, Varren, and Cerberus back to Terra[2f]. He was then recruited into Malcador's Knights-Errant.[4]

After the majority of the Blood Angels Legion and their primarch, Sanguinius, were presumed lost in the Signus system, Rubio was sent to Baal to deliver Malcador's grim judgment that the Legion be disbanded and their assets distributed to other loyalist forces. He came close to being slain by the rebellious Blood Angels, but was saved by the last-minute arrival of an astropathic message from Signus, confirming that Sangunius and a portion of the Legion had survived.[4]

Later Rubio was part of the Knights-Errant mission to infiltrate the Sons of Horus flagship Vengeful Spirit and mark it in preparation for a Space Wolves operation. However the team was discovered, and Rubio was badly injured by Tormageddon during the confrontation in Lupercal's Court. Rubio's body escaped with the rest of the Knights-Errant aboard the stealthship Tarnhelm, but he was put into an induced coma to allow his body to heal.[5]

Shortly before the Siege of Terra, Rubio was busy fighting Cultists on Terra along with the rest of the Knights-Errant. Along with Malcador himself, Rubio investigated the disappearance and subsequent mutilation of still-living Sisters of Silence across the world. While studying the captured Sisters with Malcador inside their prison on White Mountain, it was revealed that Erebus had captured and altered Rubio's memories while on Calth. Using the Sisters comatose chanting as a trigger phrase, Rubio was brainwashed into believing that Malcador was an enemy who sought to one day destroy the Imperium. Due to the null-field by the nearby Sisters, Malcador was apparently powerless as Rubio attacked. However Malcador was able to use his Archaeotech collar to create a powerful Conversion Field which restrained Rubio. After killing several of the Sisters with Rubio's sword, Malcador's powers were restored and he was able to undo the damage Erebus had done to Rubio's mind. When Rubio awoke, Malcador lied and stated that Rubio had been wounded saving his life from the crazed Sisters.[6]

Rubio later was gathered by Malcador and led to a hidden chamber underneath the Imperial Palace. Malcador explained that Rubio along with eight other chosen Knights-Errant must now erase their pasts and take on new identities for a new war that would determine the fate of humanity. This war was not the Heresy, but one that would be waged against the predations of the Warp. There they were brought before the Emperor himself, who explained their coming mission. Rubio became Koios, founder of one of the Grey Knights Brotherhoods.[6]

Koios is an alternate spelling for Coeus, one of the mythical Greek Titans. 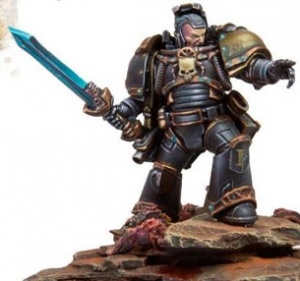