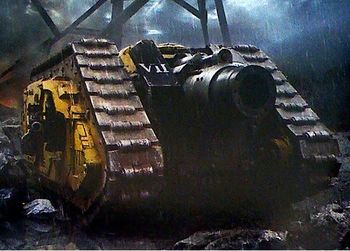 The Typhon Heavy Siege Tank was a heavy assault vehicle used by the Legio Astartes during the Great Crusade and Horus Heresy.

Named after the 'Great Beast' of Terran myth, it was developed by the Adeptus Mechanicus simultaneously with the Spartan Assault Tank and as a result shares its basic hull, armor, and chassis designs. The Typhon is a mobile gun and siege platform which operates a single massive Dreadhammer Cannon.[1]

The design itself was created in response to a request from Perturabo, Primarch of the Iron Warriors, who demanded a vehicle that could deploy rapidly but also carry heavy fortress-breaking firepower.[1] As with many other classes of heavy tank, the Typhon fell out of use in the aftermath of the Horus Heresy. However some chapter's still have small amounts of Typhon's in service. Still a lot of Masters of the Forge reluctant to use Typhons in all but the direst circumstances, believing that their creation's bonds with Perturabo may stain their machine-spirits forever.[2a]

The main weapon of the Typhon - Dreadhammer Cannon can demolish any fortifications of the enemy and since Great Crusade provided strong siege addition to any Space Marine army.[2a]

Chaos Space Marine warbands are still known to use Typhon's, but these are relics of the Great Crusade and have long since been Daemonically corrupted.[4] 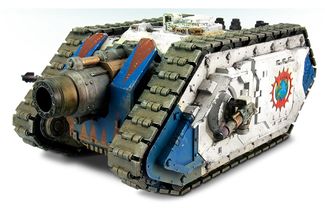