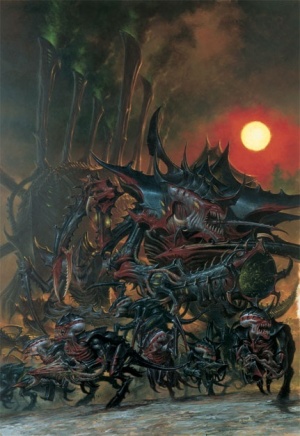 A horde of Tyranids[7]

The Tyranids, also known as The Great Devourer are an extragalactic alien race, whose sole purpose is the consumption of all forms of genetic and biological material in order to evolve and reproduce. Tyranid technology is based entirely on biological engineering. Every function is carried out by living, engineered creatures, each of which collectively forms the Hive Fleet, directed by a single Hive Mind.

The Tyranids are seen as one of the gravest threats to the entire Galaxy. They seek only to consume all organic life and cannot be reasoned with or deterred in this quest. Worse still for the Galaxy, thus far the Tyranid Hive Fleets that have been encountered are merely the furthest stretched tendril of the main invasion fleet that is still traveling in the void of space.[10]

The Tyranids were first attracted to the Milky Way Galaxy when the xenos communication device known as the Pharos was overloaded in the Battle of Sotha during the Horus Heresy.[12] The exact origin of the Tyranids themselves is unclear, save the fact that they are not of The Galaxy and have only recently arrived here after traveling countless millennia in the intergalactic void. It is unknown which galaxy they originated from, or for how long the Tyranid race has been on its genocidal rampage, but it is believed that it is the Astronomican that is drawing the Tyranid Hive Fleet to threaten the galaxy[1j]. Indeed their very name is but a title given to them by the Imperium, named after the planet where they were first encountered (Tyran). It is possible that they have been preying on other galaxies since time immemorial.[1b] According to another source, they have consumed one thousand galaxies and are responsible for the annihilation of millions of intelligent species.[3]

The Imperium's first official contact with the Tyranid race was in 741.M41, when the Hive Fleet later known as Behemoth invaded the Eastern Fringe and annihilated planet Tyran. However, reexamination of Imperial records has led to speculation that the Tyranids have been invading, or at least probing, the Galaxy for much longer. Some of the Galaxy's most notorious predatory beasts, such as the Catachan Devil[2b] or the Fenrisian Kraken[8], are guessed to be the descendants of ancient Hive Fleets.

Records kept by the Ordo Xenos of the Inquisition suggest contact with Tyranid bio-forms as early back as M35; even more remarkable, in 937.M41, a Bio-ship was discovered beneath the surface of Nusquam Fundumentibus, where it had lain dormant since around M34. This discovery raised the disquieting possibility that other dormant Hive units are already "salted" around the Imperium as a whole, waiting for a new Hive Fleet to awaken them[9].

The Tyranid forces are constantly changing and evolving at an unnatural speed. It is unlikely that all types of Tyranids have been seen by the Imperium, and still less likely that they will ever all be seen. The most frequently seen species are:

In addition to these, there are also Dominatrixes which ensure good communication between all of the Tyranid forces. There are also Norn-Queens who live within the Hive Fleet and spawn new Tyranids. Originally creatures called Zoats were part of the Tyranid force and some Magos Biologis believe that they are left over from a much earlier Tyranid invasion, although they appear to have disappeared from common sight[Needs Citation].

Within the Tyranid swarm there is no idea of individualism as each unit is linked to the next in a form of swarm consciousness. There is only one reason for the creation of any of the forces involved in Tyranid armies: to implement the will of the swarm, be it a Hive Tyrant or Ripper Swarm. This gestalt consciousness is commonly referred to as the Hive Mind.

Certain Tyranid units are considered Synapse Creatures, whose job it is to control the lesser species within the swarm. They are capable of receiving and sending orders via the Hive Mind and this connection is vital to the effective running of the Tyranid race for, without it, the swarm would collapse into disarray. Usually Synapse Creatures are fielded in relatively large numbers to allow a rapid advance of the lesser creatures to remain in range of a synapse creature. 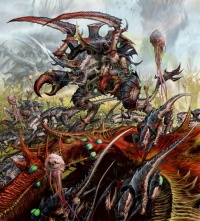 A Carnifex leads a Tyranid swarm[1a].

Tyranid forces are broken up into huge Hive Fleets which appear to be moving independently of each other.

Notable Tyranids Incursions in the Galaxy 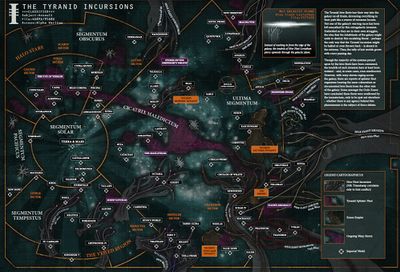 In the process of assimilating a planet's biological and inorganic materials, the most important stage is the location of a suitable target. One method by which they accomplish this is the spectral analysis of distant stars to determine their likelihood of supporting life.[4] However, the fastest and most common method is the use of vanguard organisms, millions of which range hundreds of light-years ahead of each Hive Fleet, investigating each star system they encounter for signs of life.[4] Once a suitable world has been detected, these bio-vessels spawn infiltrator-organisms, such as Lictors, Genestealers, or specialized Gaunt strains, and launch them onto the world via Mycetic Spores. Once inserted, these organisms will seek out all life and target those of a highly-organized nature, such as humans, restricting themselves to lone targets so as to avoid revealing their presence.[4] Genestealers in particular will seek to infiltrate communities and create cults, not only to signal the planet is ripe for consumption but to weaken its defenses against the Hive Fleet's arrival.[4] 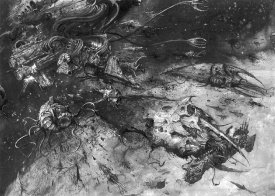 As the psychic beacon of the infiltrator-organisms flourishes, indicating a rich feeding ground, so does the Hive Fleet home in on it, in the process cutting off all interstellar communications as the Shadow in the Warp blankets the target system. Upon arrival to the planet, the Hive Fleet will disperse within the planet's upper atmosphere and begin launching millions upon millions of Mycetic Spores.[5] Many will contain Tyranid warriors of various strains, from Rippers to Bio-Titans, and so come in a multitude of sizes. Others will deliver zoomorphic symbiotes and parasites, which target and mutate the planet's flora at a rapid rate. Within hours verdant forests are replaced with highly-aggressive alien vegetation, including Capillary Towers, which begins the process of transforming the planet's atmosphere into a hothouse, turning the sky a sickly red and raising temperatures at an accelerating rate.[5] Other spores are nothing more than giant cyst-bombs, filled with viral and poisonous organisms which burst over population centers, killing millions of people in the opening hours of the attack. Each one will cover an area many hundreds of meters across with acidic digestive bile, starting the process of future ingestion.[5]

After the initial attack, vast swarms of flying Gargoyles will herd the native population into the path of fast-moving hordes of Gaunts to be viciously slaughtered. The defenders, often underestimating the Tyranids' intelligence, make fighting retreats to buy themselves time to regroup from the onslaught, only to be encircled and destroyed as it becomes apparent they were merely herded into prepared killing grounds.[5] These last pockets of resistance will become the targets of larger Tyranid species, from Warriors to Carnifexes and Bio-Titans, which eradicate the defenders with sheer offensive power.[5]

With resistance ended, consumption of the planet's resources begins. Bacterial agents and vast tracts of feeder organisms, pupated from the carcasses of native life forms, ravage the landscape of every ounce of biological matter before being collected into Reclamation Pools, where the matter is rendered into a thick, nutrient-rich gruel.[6] This includes all mutated plant-life, which has finished altering the atmosphere into an oxygen-rich environment, and any infested organisms, who march blank-faced into pools' depths to be consumed by the Hive Fleet.[6] As the digestion pools swell, the Hive Fleet's ships cluster in low orbit as vast capillary towers emerge to link with proboscis-like feeding tubes and pump the biomass into them.[6] The final stage of the harvest is the consumption of the world's atmosphere and seas, with vast drone-ship haulers descending to low orbit and sucking up every useful element left. Eventually the Hive Fleet will depart, having left the world a desolate airless rock stripped down to the molecular level, to begin the consumption process on another world.[6] The Tyranids will also consume metal, rocks, and other minerals for microscopic life, but usually can not obtain much biomass from this.[13]

Below is a general outline of a typical Tyranid planetary assault (in particular, this data is collected from the Tyranid invasion of Dalki-Prime)[2a]:

According to Belisarius Cawl, the Tyranid consumption of a planet is only surface-deep. Water and microbes continue to live on deep below its surface. Thus with the right terraforming technology and time, it is possible for worlds consumed by the Tyranids to return to life.[13]