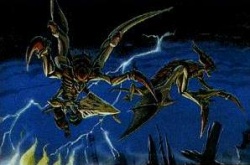 Tyranid Shrikes, previously known as Harpies[1] are a member of the Warrior genus, possessing wings and capable of flight, serving as mobile Synapse Creatures and shock assault troops.

Shrikes are a winged adaptation of the Warrior bioform, fulfilling similar battlefield roles and allowing Synaptic coverage to extend to the fast-moving elements of the swarm, such as Gargoyles and Harpies which might otherwise outrun those Synapse Creatures incapable of flight and be separated from the Hive Mind. While sacrificing some of the protection of their chitin carapace for the ability of flight, few enemies expect an assault of creatures as large as Tyranid Warriors from the skies, thus allowing Shrikes to perform surprise attacks with great speed and efficiency, the element of surprise making up for their relative lack of protection. Their speed and mobility as well as their large selection of biomorphs make them exceptionally flexible, allowing them to fulfill many battlefield roles from surprise assaults directed at the weakest elements of the enemy force, to filling gaps in the synaptic web at a moment's notice.[3]