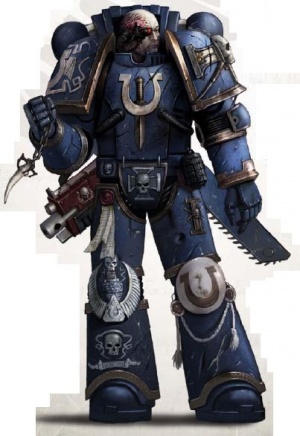 Tyrannic War Veterans are an elite section of Ultramarines Chapter originally created under the watchful eyes of Chaplain Cassius. These veterans are made up of the warriors who have fought and survived battles against Tyranid forces since the attack of Hive Fleet Behemoth. Since then the Ultramarines have spared others the difficulty of fighting the Tyranids while constantly rebuilding their First Company with these specialists. Over half the First Company is now made up of Tyrannic War Veterans.[Needs Citation]

Some Ultramarines Successor Chapters, such as the Imperial Reavers, are also known to operate formations of Tyrannic War Veterans.[2]

In the aftermath of the Battle of Macragge, the Ultramarines had suffered grievous losses, losses which would take decades to replace. In order to accelerate the process, the Ultramarines' Chapter Master, Marneus Calgar, began offering his warriors for secondment to the Deathwatch, the chamber militant of the Ordo Xenos.[1] In service to the Inquisition these Ultramarines quickly gained experience fighting against the xenos threat, particularly Tyranids, and with the successive assaults of more Hive Fleets more warriors became quick learners in how to efficently kill the beasts. Under the personal direction of Chaplain Cassius, this new breed of warrior were formed into specialized squads called Tyrannic War Veterans.[1]

However, despite the Master of Sanctity's approval, there was resistance to such a specialized formation created within the Chapter, especially its lack of sanction by the Codex Astartes. To break the deadlock of arguments for and against their formation, Marneus Calgar called for a great meeting, the Conclave of Hera, to be held after the Feast of Remembrance where every member of the Chapter would have their say in the matter.[1] Waiting for as many Space Marines to arrive as possible, Calgar began the proceedings within the shadow of Roboute Guilliman himself, and for the next several months each warrior was allowed to speak before the assembly, with Cassius and Captain Severus Agemman passionately pleading in favor of the Veterans.[1]

At the end, Calgar declared he had heard everything he had needed, and for the next several weeks he retired to his chambers, fasting and praying for guidance from Guilliman and the Emperor. At dawn on the 40th day, Calgar emerged and declared his answer: the Tyrannic War Veterans would prove themselves on Espandor, where word had just arrived of Tyranid forces infesting its forests. Should they prove successful in extinguishing this threat, the Veterans would prove themselves worthy and be formally recognized into the Chapter and Codex Astartes. Captain Agemman, Chaplain Cassius and several squads of Tyrannic War Veterans set off to Espandor, where they successfully cleansed the xenos taint without losing a single battle-brother in combat. Thanks to their unmitigated success, the formation was formally recognized, and soon Tyrannic War Veterans began sharing their skills and knowledge with all Ultramarines, as well as be seconded to other Imperial units likely to see combat with the Tyranids.[1] 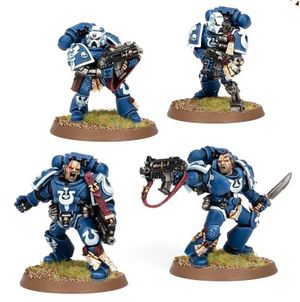 A group of Tyrannic War Veterans

Each squad is composed of a Space Marine Sergeant and four to nine Space Marines, armed with a bolter, frag and krak grenades, wearing their distinct power armour displaying purity seals and, should they earn it, Terminator Honours. One squad member may take a heavy bolter, while another may take a flamer, in place of their bolter. They may also take a Rhino or Razorback for transportation.

Tyrannic War Veterans are specially trained in how to kill Tyranids, both with close-combat and long-range weaponry, by targeting known weak points for maximum penetration and damage.[1] Tyrannic War Veterans have honed their reflexes to incredible heights to better combat Tyranid warriors in hand-to-hand combat, particularly the use of krak grenades normally reserved only for armoured vehicles.[1] They also use special Hellfire Rounds in their heavy bolters, and are trained to work with other Space Marine squads to bring down both large and small Tyranid creatures.[1]