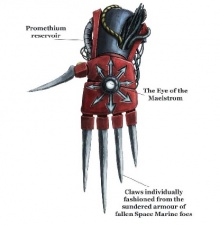 The Tyrant's Claw is a special bionic weapon forged for Huron Blackheart after he lost his right arm.

It consists of a bionic shoulder, arm and hand which increases his already impressive strength. Another aspect of the weapon is the fear it generates, not only being wielded by Blackheart himself, but by the heavy flamer which produces bursts of fire directly from his bionic palm, making it seem like he is summoning blasts from his hands.[1]

Huron's precision with his bionic attachment is such that he once rammed his claws straight through the Power Armour of an insolent Warsmith Honsou, stopping just centimetres short of piercing his hearts.[3]

The Tyrant's Claw features in both Codex: Chaos (2nd Edition) and Codex: Chaos Space Marines (4th Edition) with a similar description, however the claw seems to have switched from his left arm to his right arm since 2nd Edition.[2]