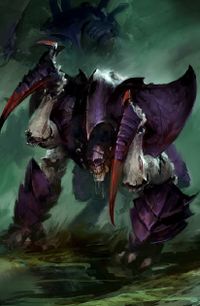 An example of a Tyrant Guard[3]

The Tyrant Guard (species name: Tyranicus scutatus[Needs Citation]) is a species of Tyranid spawned for the sole purpose of defending a Hive Tyrant from harm (though on occasion, a Carnifex may also benefit from the Tyrant Guard's protection [1]).

Tyrant Guards are among the dimmest of the Tyranid creatures, on a par with many of the smaller gaunt genus creatures in intellect. This seems to be a deliberate evolution of the Hive Mind in creating a lumbering, heavily defended and utterly loyal bodyguard with no sense of personal safety, only the continued survival of its master, often blocking attacks with their bodies.[4] Tyrant Guards can be found with a variety of Biomorphs such as Scything Talons, Crushing Claws, Lashwhips and Boneswords.[5]

They are living shields - tough, only dimly aware of pain, and all but impervious to small-arms fire. Protecting them are iron-hard exo-skeletons covered by interlocking layers of chitinous plates. They are also completely blind, as eyes would present an unnecessary vulnerable point for foes to exploit; they are instead controlled by the synapse creature they protect, becoming an extension of its body. Should their master be killed they go berserk, brutally stampeding down the murderers to prevent the knowledge of how to kill a Hive Tyrant from being passed on.[3]

Tyrant Guards are scientifically rumoured to contain the DNA of defeated Space Marine chapters as their bodies appear to include a fused ribcage and a Black Carapace, but the Imperium considers this blasphemy and denies its possibility.[1][2]