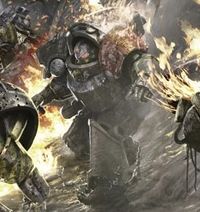 The Tyranthikos, also known as the Dominators, were an elite cadre of line breakers and assault troops within the Iron Warriors Legion during the Great Crusade.[1]

Clad in Terminator Armour, each was a veteran of many bloody sieges. Each Grand Battalion of the Iron Warriors had a unit of Tyranthikos, and Perturabo himself used them as bodyguards in battle until their replacement by the Iron Circle.[1b]

The title itself seems to have its origins on Olympia. The twelve lords of Olympia were themselves referred to as the Tyranthikos[1a]