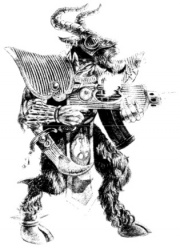 Tzaangors are a subtype of Beastmen; those dedicated to the Chaos God Tzeentch.[1]

Tzaangors are considered as natives of the Planet of Sorcerers, despite that world being uninhabited until the arrival of the Thousand Sons. It is recorded that, over many thousands of years, the Planet of Sorcerers has become inhabited with a sizable number of humans, both directly employed as servants of the Thousand Sons, and living wild beyond their towers, as a result of the Chaos Space Marine Legion's habit of kidnapping mortals. Those that have escaped thralldom to the Sorcerers of the Thousand Sons over the years have since created the 'free' population of the planet, although all these individuals are still slaves to Tzeentch's plans. Amongst these unbonded groups exist the Tzaangors; it is unknown if they originate from Beastmen transplanted to the planet like ordinary humans, or whether they are a result of the mutations so favoured by the planet's patron. Nevertheless, they exist in enough numbers for the Thousand Sons to be able to use them as source from which to recruit the guardians of their Towers. The Thousand Sons appear to value the use of Beastmen in this role and treat them well; few make any attempt to escape and return to the warbands they began life in.[1]

Unlike other Beastmen Tzaangors are sharp of intellect and bright of colouration. In serving their sorcerous masters Tzaangors often seek out the priceless relics and powerful artefacts - in that way hoping to earn the chance to elevate themselves. However, despite their relative sophistication Tzaangors still cruel beasts who often favour a sheer, shocking brutality.[2] Thousand Sons Sorcerers often used Tzaangors packs as a cannon fodder units to absorb an enemy fire and screening the advance of the main Thousand Sons Space Marines units.[3] Tzaangors also live on different planets. On the Planet of Sorcerers they gather in great packs, roaming the shifting warp-wastes of the planet. Wise Tzaangor Shaman herds of their kin on long pilgrimages leading the great migrations following lines of power that merge through the planet’s crust, and converging at sites where the seething aetheric energy is at its thickest. At such places of power Tzaangors raise great flux-cairns – big megaliths inscribed with runes and glyphs, and shaped in Tzeentch symbols, which serve as storages for the arcane knowledge stolen and despoiled by the tribes of Tzaangors. To transform other planets for a full-scale invasion of Chaos forces, the wise Shamans use the energy to channel Tzeentch’s power throughout realspace by erecting duplicate monoliths in the barrens and jungles of these worlds.[4b]

In battle, Tzaangors are armed with simple weapon of close combat, like chainswords, combat blades and autopistols.[4a]

More intelligent exemplars of the Tzaangors always gather in special units or became a powerful characters: 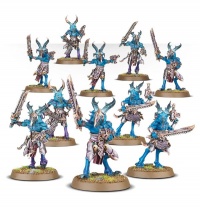