Tzeentch is a God of Chaos who represents the vitality and volatility of change. Tzeentch is closely associated with sorcery and magic, as well as dynamic mutation, and grand, convoluted scheming. The domains of history, destiny, intrigue and plots are his chief interests, and in pursuit of these aspects he listens to the dreams and hopes of all and watches their plans take form. He is not content to merely observe, however, and chooses to interfere in the skeins of fate in order to fulfill his own, unknowably complex schemes. Tzeentch is known by an endless multitude of names, but the chief titles he bears are the Changer of the Ways, the Master of Fortune, the Great Conspirator and the Architect of Fate.[6] 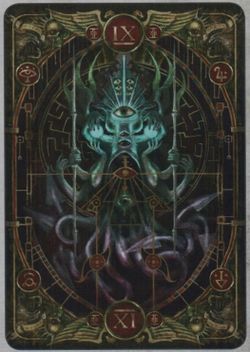 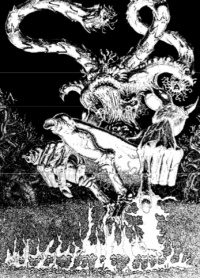 The Changer of the Ways

Tzeentch was created and sustained by the desire for change that is an essential part of nearly all mortal life; almost all species are aware of the concept of a better tomorrow, and any form of dreaming, imagining or resolution for change empowers the Chaos God. Like the other Chaos Gods, Tzeentch is strongly interested in humanity due to the power and drive of the human spirit and how that uniquely ties into his interests; no creature is more volatile or more ambitious. The spark of wishing for a different existence can turn into a fire that can change a country, a world, and perhaps ultimately an inferno that can alter the fate of galaxy itself; this is Tzeentch.[6]

Magic is essentially an expression of change driven by will, and as such is the domain of the Changer of the Ways; Tzeentch is the greatest magician in all of the Warp. Many of those drawn to his auspices are sorcerers, while many others will be gifted with sorcerous powers as a reward for their actions. Tzeentch's daemonic aspects are essentially creatures of magic rather than any sort of conventionally understandable physicality.[6]

As well as an interest in magic, Tzeentch takes keen notice of all plots and plans. As the Great Conspirator, he is aware of all the dreams and plans of mortals. This is how Tzeentch is able to perceive the future; by being aware of all that is planned and all that may potentially happen, he can see all possible fates. Wishing to be involved with the fates of existence, Tzeentch directly and indirectly interferes in the fates of all things. His intentions are unknown, his schemes insanely complicated and his plans so extraordinarily long-term it may be that none other than he will ever see the end of all of them. It is often claimed that Tzeentch wishes to extend his power over the Materium, or to defeat his brother Gods; however, it is the nature of Tzeentch to care just as much about altering the fate of a single individual. Tzeentch's schemes also often appear contradictory to those who discern them; this is because only Tzeentch can understand his own interests and perceive the full possibilities of each action.[6]

Tzeentch has as many depictions as he has names. His skin is said to constantly shift and roll with faces, faces that leer and express mockery. As Tzeentch speaks, these faces repeat what he says, but with different inflections, or a word different here and there, or in fact provide running commentary or analysis on what he is saying; this makes it almost impossible to be certain what meaning Tzeentch is actually expressing. While these skin-faces come and go very quickly, Tzeentch's actual body is said to be constant; his head is low on his chest as if he had no neck and horns project from his shoulders. Raw magical energy surrounds him like smoke, with the faces and bodies of those whose fates he is considering manifesting before him in subtle and complex patterns.[6]

Tzeentch's opposite force in the Chaos pantheon is Nurgle, who stands for despair and the acceptance of one's fate. Such a form of existence is anathema to Tzeentch, who derives power from the will to change one's destiny.[6]

"Nine is the number most sacred to the changer of the ways. It is only upon tracing the ninth sigil that the runes of a change-scroll begin to glow, morphıng into their true nature. There are nine distinct rites an acolyte must master before he can unlock the secrets that will permit him to pierce the veil, a process that will allow a worthy aspirant to draw upon the boundless energies of the immaterium. To remain unbroken, a summoning symbol must contain nine sequential rings – each perfectly executed in a nine-fold process. Nine are the chants of the kairic cultists, and for casting, a coven of nine is by far the most powerful of groupings. Yet it is not mortal rites alone that obey the great sorcerer’s enneadic rules. The number nine can be found woven throughout the unfathomable and ever changing structures of the architect of fate’s own realm within the warp. The lords of change, the greatest servants of Tzeentch and commanders of his convocations, are ordered within nine levels of trust. All seek their master’s favour, and those in ascendency rule the nine fractal fortresses. Beneath each of those most exalted are nine hundred and nintety-nine legions, each divided into nine hosts. It is said that when daemons are slain, their immortal spirit appears within the impossıble fortress, arriving before their maker from one of the ever-shifting nine gates – there to be either reformed or re-absorbed by the will of Tzeentch."[10]

There was once a time when Tzeentch ruled supreme over the Warp, his powers vastly superior to those of the Other Chaos Gods. However this state of affairs ended when the other Dark Gods temporarily set aside their differences and joined forces. During the final battle, Tzeentch faced certain defeat and cast a great spell upon himself. He crystalized his thoughts and body even as he was hurled against the Endless Mountains. Upon impact, his form was shattered into ten thousand pieces, each of which contained a fragment of his essence. These were flung across space and time, and while Tzeentch was forever weakened legend suggests this event marked the beginning of the use of sorcery in realspace.[10a]

The mortal champions of Tzeentch are especially dangerous, as they often wield awesome sorcerous power on top of their considerable physical prowess. Professors, philosophers, scientists, intellectuals, and artists also swell Tzeentch’s ranks, for as much as the Changer of Ways embraces magic and guile, he also loves knowledge in all its forms. Predictably, Tzeentch finds those who investigate forbidden or taboo subjects particularly interesting, as individuals willing to defy convention and perhaps even ethics and the law to pursue their intellectual ambitions often make willing and effective servants. Some thinkers who reach a stumbling block in their scholarly pursuits can become obsessed with a particular problem or question. These scholars may try any number of approaches to find answers, but no experiment, no amount of research or consultation with experts, and no amount of sweat and elbow grease brings them closer to a solution. These obsessed scholars are particularly vulnerable to Tzeentch’s temptations. While some may deliberately seek the assistance of the Master of Fate, many more unwittingly fall into Tzeentch’s service after accepting help from an insightful but mysterious new colleague or after gazing too long at a classified or forbidden text that somehow finds its way onto their desk.[8]

The Daemonic armies of Tzeentch are known as the Scintillating Legions. These hordes go to war in bizarre carnivals of magical violence, obliterating and mutating foes with sorcererous magic. Unlike the forces of Khorne or Nurgle, the Tzeentchian Legions are often in flux, shifting composition or altering tactics to better serve their master.[10] There are several types of Tzeentchian Legions, such as Conflagration Legion which is built around a force of Flamers or a Legions Anarchus, unpredictable formations used in random and unexpected incursions. The Veiled Legions are the most mysterious of all of Tzeentch's forces, they rarely appear and when they do are known to slink away unseen after their plan's culmination.[10]

Each of the innumerable Scintillating Legions is commanded by a Lord of Change who operates with a high degree of independence. Each of these legions is divided into nine hosts, each commanded by a Daemon Prince or Herald of Tzeentch. Fitting of the Changer of Ways, these commanders endlessly plot against one another for Tzeentch's favor. The nine most favored Legions are granted one of the Fractal Fortresses of the Crystal Labyrinth of Tzeentch.[10]

The Daemons of Tzeentch are inherently magical creatures, even more so than the other daemons of chaos; they appear ephemeral, transparent or as if made of light. Their very presence can alter the rules of reality, and they can leave trails of multi-coloured fire and mist behind them as they move.[6]

A Daemon Engine is a part-technological, part-daemonic vehicle, those dedicated to Tzeentch include -

As with all the Chaos Gods, Tzeentch will often reward his most favoured followers with special gifts and blessings. Tzeentch's gifts can take many forms, including physical mutations, daemon weapons or great sorcerous abilities.[9]

The Maze of Tzeentch 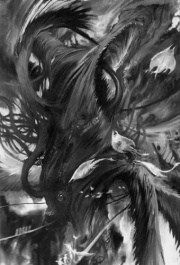 The Maze of Tzeentch[Needs Citation]

The Maze of Tzeentch, also known as the Crystal Labyrinth, is Tzeentch's realm within the Warp. This maze is woven from the raw fabric of magic, threaded upon deceit and conspiracy. Of all the landscapes of the Warp, this domain is by far the most bizarre and incomprehensible, for its crystalline structures force travelers to view all nine dimensions simultaneously. This effect not only distorts the senses of any who intrude, but will also pulls apart their purpose and aspirations and turns them to insanity and despair. Unlike the realms of the other Gods of Chaos, it is not defended by Daemonic warriors, allowing instead for any intruder to become inevitably lost within its confines.[9]

Interchanging, shifting avenues made of pure crystals of every colour crisscross Tzeentch's realm. Hidden pathways built from lies and schemes lead out from the maze and infiltrate the dominions of other gods, binding together the fractious Realms of Chaos. The maze itself has no daemonic defenders. Its own illusory passages are enough of a barrier to any intruder not possessed of the strongest mind imaginable[Needs Citation]. Its glittering corridors reflect not only light but also hope, misery, dreams and nightmares. The labyrinth does not merely reflect but also distorts, pulling apart hope and purpose turning them into insanity and despair. Driven by Tzeentch's unconscious schemes, the labyrinth constantly moves and rearranges. Those lost within the maze's reaches will wander for eternity with their minds shattered, their dreams broken upon the wheel of their own failed ambition[Needs Citation].

At the centre of the maze, hidden from those who have not the insane insight to find it, stands the Impossible Fortress. The architecture of the bastion is constantly replaced by new and ever more maddening spires, gates and walls. doors and other entrance points yawn open like starving mouths, before clamping for eternity moments later, barring all access. Within the Fortress time and space does not exist at all and gravity shifts and changes, or disappears all together. Lights of every colour, some even unknown in the real universe, springs from the shifting walls. For mortals, who are so locked in their physical ways, the fortress is impenetrable. Men are driven insane, while their bodies might implode or be pulled apart by the forces unleashed by Tzeentch's passing thoughts. Even immortal daemons cannot easily endure the twisted horror of the Impossible Fortress and only the Lords of Change can safely navigate its corridors, and tread the secret paths that lead to the inner sanctum of the fortress, the Hidden Library, where Tzeentch, the puppet master himself resides, eternally plotting.[1]