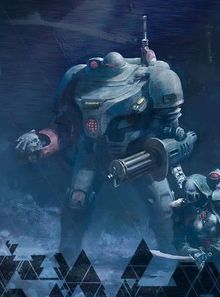 UR-025 with the Eldar Ranger Amallyn Shadowguide

UR-025 is an ancient Robot that pre-dates the Imperium itself.[3]

UR-025 dates back to a time when Mankind first perfected artificial intelligence. The robot is in fact one of the ancient Men of Iron which once ravaged the Galaxy.[3] The construct views itself as above humanity but seems to hold no real malice for it, and even seems to regret having to kill in order to remain free.[4] When it learned that a new Blackstone Fortress had appeared in the galaxy, UR-025 joined with a group in order to explore it. However, to hide its true identity, UR-025 has posed as one of the Adeptus Mechanicus's Legio Cybernetica warmachines[1], whose Magos Nanctos III had sent it to learn the Fortress' secrets[2]. Now that UR-025 is within the vast Xenos structure, the Robot's main goal is to find the Fortress' forbidden technologies[1] and seek out the seemingly sentient constructs that inhabit it.[2]

UR-025 practices a faith similar to that of the Adeptus Mechanicus, stating that it has met the real Omnissiah (not the false one) and thinks that it would find the Imperials to be quite disappointing.[4] 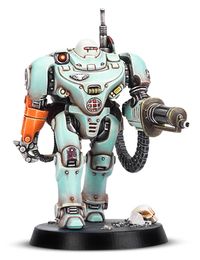