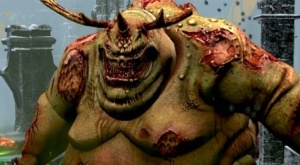 Ulkair is a Great Unclean One, a Greater Daemon of the Chaos God Nurgle.[1]

Ulkair is first known to have engulfed the planet Aurelia into a massive Warp Storm, the aftermath of which left the planet a frozen wasteland. Later, the Daemon was confronted by Moriah of the Blood Ravens, who fell in battle against the Greater Daemon. Moriah's apprentice, Azariah Kyras, managed to avenge his master by imprisoning the Daemon into Aurelia, where it remained trapped until the world's invasion by the Black Legion.[1]

As the Black Legion invaded Aurelia, Eliphas the Inheritor concocted a scheme to sacrifice enough Space Marines in a ritual which would break Ulkair from his prison. Manifesting into the body of a Plague Marine, Ulkair was finally set free once more and began to rip the world of Aurelia apart. Only through the efforts of the Blood Ravens Captain Gabriel Angelos was Ulkair defeated and imprisoned once more.[1]