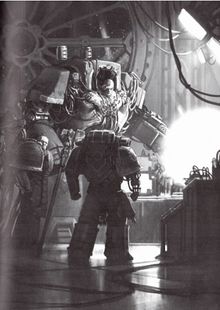 Ulrach Branthan was the Captain of the 65th Clan-Company of the Iron Hands Legion, who escaped from Istvaan V with a contingent of Iron Hands aboard the Sisypheum after having been seriously injured during the Drop Site Massacre. [1]

Both of his legs had been mutilated as well as one of his arms and he suffered from multiple severe other wounds. When his damaged body was recovered and brought aboard the Sisypheum the Apothecary realised it was beyond repair. With no Dreadnoughts available the Apothecary turned to the next option and used The Heart of Iron, a relic from the Dark Age of Technology. This device clamped across the captain’s torso like a mechanised arachnid parasite and started to slowly regrow his damaged organs. But it was also feeding off his vitality and would most likely have killed him before healing all his damaged organs. In addition the stasis field generator of his medical casket helped to keep Branthan alive.[1]

Branthan was later revived inside the shell of the former Dreadnought body of Karaashi Bombastus but without a sarcophagus, merely being placed into a cable-wound cocoon of raw sutures and bare flesh.[2] He took part in the final mission of the Sisypheum to acquire the Magna Mater on Luna. During the fighting, Branthan and Cadmus Tyro sacrificed themselves to hold off Justaerin in order to allow Nykona Sharrowkyn to escape with the Magna Mater.[3a]