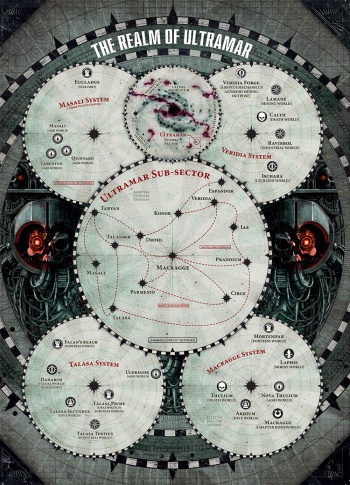 The current realm of Ultramar

Ultramar is the realm of the Ultramarines, and part of the greater Imperium. Unlike most Space Marine Chapters, the Ultramarines do not rule over a single world or fortress-monastery, but a an entire sub-sector consisting of approximately five hundred habitable planets.

Ultramar, known as the Five Hundred Worlds, is a sub-empire within the Imperium of Man located in the southern reaches of the Eastern Fringe within the Ultima Sector of Ultima Segmentum.[1c][15a] One of the furthest realms from the light of the Astronomican, Ultramar lies south of the Tau Empire and Ichar IV.[4]

The Stellar Realm is divided into five sectors (North, South, East, West and Center). Four of these sectors are ruled by a Tetrarch appointed by Guilliman himself. Every sector has a capital world where the Tertrarch oversees his section of Ultramar.[11a] 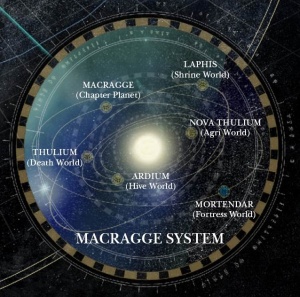 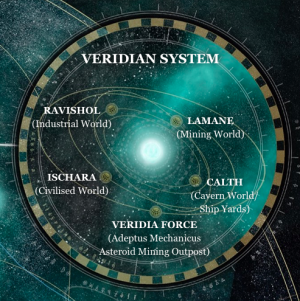 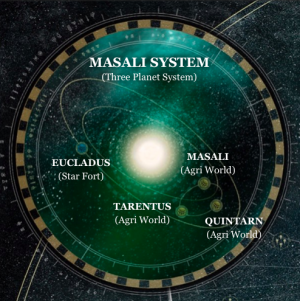 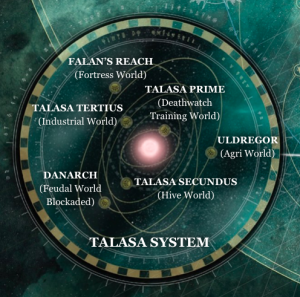 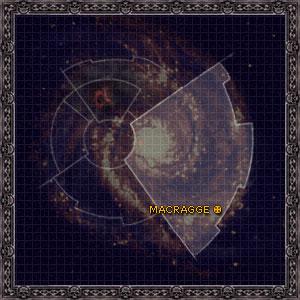 The location of Macragge, the center of Ultramar 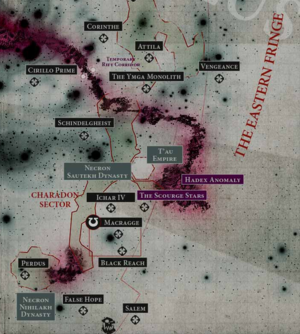 Ultramar on the Eastern Fringe 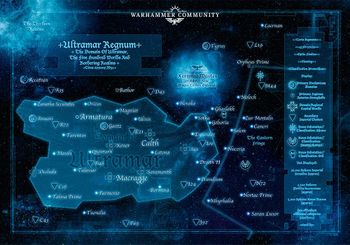 Ultramar during the Horus Heresy[18]

Prior to the formation of Ultramar, the world of Macragge had maintained contact with its neighboring systems, its industries and peoples having largely survived the chaos of the Age of Strife.[1a] The world would be transformed however by Roboute Guilliman, becoming a prosperous and well-governed planet with trade routes that brought in raw materials and immigrants on a regular basis.[1a] It was during this time that Guilliman was rediscovered by the Emperor, who named him Primarch of the Ultramarines Legion and moved their forward base to Macragge. Within a year a new training base was operational and began taking recruits not only from Macragge, but from the surrounding systems as well.[1a] This close relationship with the other worlds would form the basis of what would become the Ultramarines' stellar empire.[Needs Citation]

During the Great Crusade, Ultramar maintained a steady supply of new recruits for the Legion, such that the Ultramarines became one of the largest Legions ever.[2a] It, along with the Ultramarines themselves, was left largely unscathed by the Horus Heresy[1a], though it was invaded by the Word Bearers resulting in the Battle of Calth.[6]In addition to that, about one fifth of the Five Hundred Worlds were destroyed by the Word Bearers and World Eaters during the Shadow Crusade.[6]In the aftermath of their campaign the Word Bearers were able to erect the Ruinstorm, severing Ultramar from the rest of the Imperium. Guilliman became worried that the Imperium itself was lost and sought to have Ultramar become the heart of a new contingency empire: Imperium Secundus.[7]

Ultramar was not attacked again until the War of the Beast when Ork forces landed on Quintarn and Prandium.[9] Ultramar next came under attack in the First Tyrannic War with the invasion of Hive Fleet Behemoth. Though ultimately defeated, Behemoth would leave its mark, especially with the complete destruction of Prandium.[5a]

Ultramar would be threatened a third time when the Iron Warriors Warsmith Honsou assembled an enormous warband to invade Ultramar and seek revenge against Captain Uriel Ventris.[5] While the Chaos forces would be beaten back, the War for Ultramar would see the greatest loss of life since the Tyranid invasion of Hive Fleet Behemoth.[1a]

Later, after the Thirteenth Black Crusade Ultramar suffered yet another Chaos invasion, this time by the Black Legion. During the fighting Roboute Guilliman was reborn and drove the invaders from Macragge, but left for Terra on the Terran Crusade. In his absence, Marneus Calgar and Tigurius were left to deal with the remaining Chaos forces.[10] Guilliman declared that Ultramar's original borders of the 500 Worlds was to be restored, and many of these resistant planets had to be forcibly reconquered. Shortly thereafter Gulliman re-instituted the Tetrarch system.[11c]

Shortly thereafter, the forces of Nurgle began to overwhelm Ultramar in a series of plagues and invasions known as the Plague Wars and Invasion of Konor. The traitor forces, led by Mortarion would initially make headway despite determined resistance by the Ultramarines and their allies. However, with the return of Guilliman and his Primaris reinforcements, the Nurglite invasion would be fought to a standstill. Their supply lines cut, their initiative lost and the Scourge Stars in peril due to the War in the Rift, the Nurglites chose to retreat from Ultramar.[12]

There would then be a period of rebuilding, decontamination and fortification across the recently reformed 500 Worlds. Guilliman not only oversaw the reconstruction of Ultramar but also greatly increased its military strength to ward off future invasions.[15b]

Upon its assimilation into the greater Imperium during the Great Crusade, Ultramar became a state within a state, enjoying a large degree of autonomy that continues to this day. While all within Ultramar are subjects of the Emperor, the Supreme Leader of Ultramar was always Roboute Guilliman. After his wounding by Fulgrim, the leadership of Ultramar fell to the Lord Macragge with the Regent of Ultramar as his deputy.[3b] When Ultramar was a large realm of 500 worlds, there were Tetrarchs that operated below Roboute Guilliman from four key worlds. After the Heresy and the vast decreasing of Ultramar in size, the post of Tetrarch was abolished but recently has been reinstated by the reborn Roboute Guilliman.[11a]

Below Tetrarchs were Imperial Commanders with connections to the Ultramarines. Each world of Ultramar is ruled by feudal lords loyal to the Chapter Master of the Ultramarines, which is why he is also known as Lord Macragge with all the rights and responsibilities the title entails.[3b] The government of each world, besides supplying the Ultramarines with men and material, is directed towards the prosperity of their populace.[3b] The most common form of government for the worlds are Ultramar is a feudal system led by noble houses[19]. Above them all, though, is the Council of Greater Ultramar‎, which all of the current Tetrarchs are members of.[11a]

The current leadership of Ultramar, as of M42, consists of:

On the whole, the realm of Ultramar is composed primarily of industrial worlds, although they lack the nightmarish toxic wastelands common to other Imperial manufacturing centers.[3b] Raised in a warrior society which disdains those who do not pull their weight,[5b], the population is disciplined, loyal and productive, living in balance with the local ecosystem.[3b] With sprawling cities surrounded by extensive farmlands and oceans teeming with fish, each planet is completely self-sufficient, including raw materials and food, and is the envy of many other worlds.[3b] 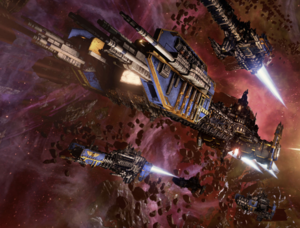 Following the conclusion of the Plague Wars, Chapters besides the Ultramarines began to guard regions of Ultramar as well. Guilliman ordered that ten Chapters would be permanently stationed within Ultramar so the newly reformed 500 Worlds would be under the permanent protection of about 10,000 Astartes at all times[11a]. These Shield Chapters of Ultramar[20] are all descended from the Ultramarines and operate from worlds located within the Realm. This increased military buildup was also so that future operations, such as the Vengeance Campaigns, could be conducted against the Scourge Stars and other regions around Ultramar, that had been overrun by the enemies of the Imperium.[11a]

The worlds of Ultramar do not pay the usual tithes, instead contributing directly to the upkeep of the Ultramarines Chapter.[1a] Though the need has diminished since the days of the Legion, each world still provides the Chapter with new recruits.[1a] It is a point of pride for a family to have provided a recruit, especially among the older aristocratic families, with many communities proudly displaying statues of the Ultramarines who were born there.[1a] For a family that has provided a renowned hero or even Chapter Master, the considerable fame and honour such a distinction provides can last generations.[3b]

Each world also maintains their own Planetary Defense Force, a well-disciplined and equipped force known as the Ultramar Auxilia.[2] These forces are similarly exempt from the tithe system; however, the efficiency and prosperity of Ultramar is such that several hundred regiments are maintained to join the Imperial Guard when needed.[3b] As a result, the regiments of Ultramar have fought all over the galaxy, often in campaigns alongside the Ultramarines themselves.[1a]

For space and orbital defenses, Ultramar can rely not only on the fleet of the Ultramarines but also the Ultramar Defense Fleet, the naval counterpart of the Ultramar Auxilia.[2] Meanwhile no fewer than six massive star fortresses – with Galatan being the largest – stand sentinel over shipping lanes and critical strategic positions, each a formidable bastion protected by void shields and possessed of enough firepower to destroy a moon.[8]

Internal security and suppression of rebellion is overseen by the secretive agency known as the Vigil Opertii[13] and Praecental Guard.[7]