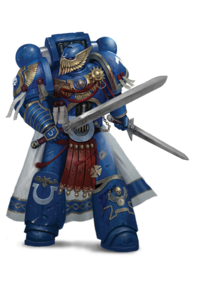 In battle they act either as a group or as squad leaders. Each bears an Axe of Ultramar, potent weapons constructed from a rare metal found on Prandium. Only the most courageous of the Ultramarines ever come close to earning this honour, and then only some of them will achieve it. They are responsible for guarding the Chapter's ancient banner, the Banner of Macragge. Members of the Honour Guard are dispersed throughout the Chapter's companies. When the banner is taken into battle by a company, a squad will be formed from the company's Honour Guard members.[1]

In battle, the Honour Guard Squad numbers between two and seven Honour Guards as well as the Chapter Ancient (Bearer of the Chapter Banner) and the Chapter Champion. They are armed with bolters, Axes of Ultramar, frags and krak grenades. The Chapter Ancient is the bearer of the sacred Banner of Macragge and is entrusted with a suit of Artificer Armour. The Champion is equipped with Powered weapons and artificer armour. They may be mounted in a Rhino, Razorback or Land Raider. They may also replace a single unit in a Command, Tactical or Devastator Squad.[1]