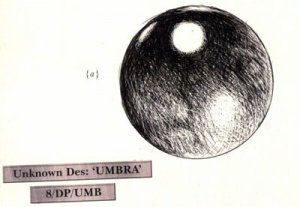 Sketch of an Umbra

The Umbra are an alien species appearing as smooth black spheres that live in the void of space, often observed attracted to areas resonant of the warp such as starship hulls and warp engines or suspected entrances to the Eldar Webway. They can manipulate and control shadows to form terrifying limbs of hooks, blades, teeth and other nightmarish shapes. [1]

The Umbra are not an organism in the standard sense, as no obvious means of motion, respiration, digestion nor excretion are evident. It is speculated that the sphere image is merely a small refection of the whole creature, with the rest of the true form existing in another dimension other than the prime material. They are comprised of an outer shell made of an unknown glossy, brittle and untextured substance showing swirling pearlescent patterns. An inner cavity is below this and surrounds a liquid core of impossible to analyse white liquid that appears non-Newtonian, prone to random solidification and variation in density, and seems to be frictionless.[1]

The Umbra can manipulate areas of shadow like oil to form shadowlimb weapons seen as hooks, blades, teeth and the like.[1]

Upon death the Umbra have been witnessed to utter a psychic deathshriek into the minds of those nearby. In the case of a dissection of an Umbra specimen, this was experienced as intense cranial pain accompanied by a flicker of images showing a humanoid figure splintering apart, a warpstorm and deep space, and finally followed by a single word: "Linger". The swirling pattern of the Umbra shell is also observed to become inert upon death.[1]

The Umbra have been observed to show a direct aversion to light, a possible weakness in countering them.[1]

Text, albeit questionable as it is within the book Xenology (which was penned by a self confessed heretic) speaks of a war between gods, quite likely the Old Ones and the C'tan. According to this account, only one Old One survived the war - Qah, the same god worshiped by the Hrud. Then when the Fall of the Eldar gave birth to Slaanesh she at last killed Qah, chopping him into a million pieces and dooming them to linger in the cold of space. It is suggested that these shards of Qah in fact become the Umbra.[1] 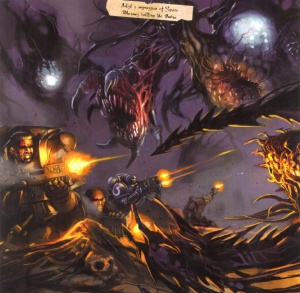 Umbra in battle against Space Marines